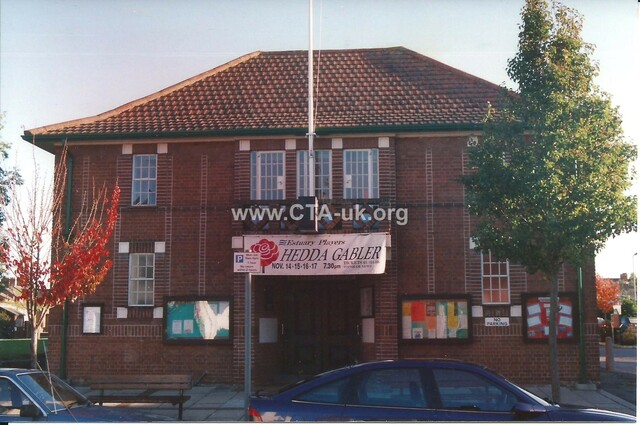 In Topsham, Devon, in 1927, James Woodrow Matthews donated £5,000 to pay for the building of Matthews Hall. The architectural firm was Boddy & Dempster, and the builder was Henry Gould & Sons. James Matthews laid the foundation stone on 26th January 1927 and opened the hall on 15th February 1928, using a silver key specially made for the occasion. To celebrate this event, a Grand Concert and Dinner was given in the hall that evening by Mr Matthews for members of the Parish Council.

The building is of red brick, two storeys high, with a small wooden balcony over the entrance. The auditorium is flat-floored. The balcony of the hall formed the Council Chamber, from where the returning officer would declare the results of elections to the waiting crowd below, and from the same balcony the Carnival Queen would address her ‘subjects’.

Amateur and professional repertory companies appeared on the 16ft deep stage (the proscenium is 25ft wide; there are two dressing rooms) and the hall was used for many other events and functions. During the Second World War it was used for ARP training, First Aid classes and gas mask practice.

The builder of the hall, Major Henry Gould, who had opened Topsham’s first cinema, the Cosy Cinema, in 1921 (see separate Cinema Treasures entry), set his sights on Matthews Hall for cinema use from the start. A projection box was constructed and the equipment and fittings were moved over from the Cosy Cinema, which immediately closed down. Manager Gordon Edds moved across from the Cosy Cinema. However, at the hall, the film shows would have been interspersed with the other activities.

In 1931 a Morrison sound system was installed, the first ‘talkie’ being “Palmy Days”, starring Eddie Cantor. By 1939 the Cinema had been renamed the Rex Cinema, and was managed by A G Curtis.

After the war, Topsham Entertainments was formed, a British Thompson Houston (BTH) sound system was installed, and the cinema was renamed the Tivoli Cinema.

Wing Commander A R Buere acquired the Tivoli Cinema in the early-1950’s, but it closed in 1960.

Matthews Hall remains at the centre of the community, being well used by local clubs, societies and charities. And it still hosts film shows: Topsham Film Society presents non-mainstream films on the first Friday of each month, from September to March.