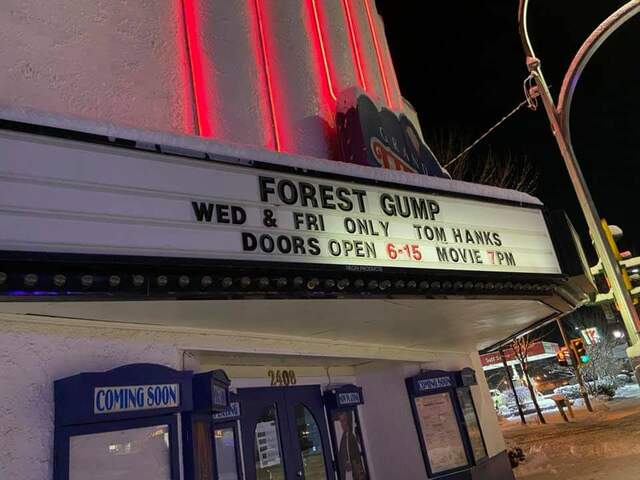 Small town theatre in a rural area. Opened as the Reo Theatre by 1921. From the local chamber of commerce: “Once a parlour, a merchant shop and now a movie theatre, this building has stood at this corner with its original façade for 90 years. A true landmark of the community.” The Reo Theatre was remodeled in 1945.

This web page at the Northword Magazine web site is headed with a photo of the Reo Theatre (no Grande in the name then) which appears to date from some time in the 1940s. The Chamber of Commerce web site must be wrong about the building still having its original façade from 90 years ago, as the style is clearly Streamline Modern, which wasn’t around in the 1920s. The paragraph about Vanderhoof on the Northwords page (which is dated June 01, 2012) says that the building was “… built more than 90 years ago and originally operated as the Reo….” suggesting that the theater actually opened no later than 1921.

A March 2, 1970 Boxoffice article about the retirement of the Reo’s long-time owner, R. C. “Cece” Steele, says that “[i]n 1945, Cece and his son Doug remodeled the old Reo Theatre in Vanderhoof, putting in a sloping floor and theater seats….” Steele also operated houses called the Reo in Smithers, where he reopened the Capitol Theatre in 1933, renaming it the Reo in 1940, and at Burns Lake, where he opened a new-build Reo Theatre in November, 1950.