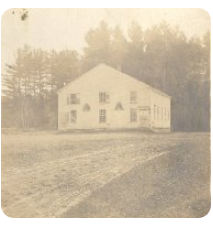 The white wooden building which for a time was known as Wiley’s Hall was constructed as a Methodist Church in 1834. It has been in continuous use in one form or another since that date.

In 1885 it was purchased by Hazen Wiley. Initially used for storage it subsequently became Lovell’s community center.

In 1904 the Women’s Library Club rented the Hall, redecorated it and renamed it Pine Grove Hall. They used it to perform plays and successfully obtain funds to construct a dedicated library.

When they vacated the premises the original name returned and the Hall was rented out to other groups. Wiley, himself, then sponsored various social activities including movies. A World War I Bond Drive was also housed there.

In 1927, several years before his death, Wiley sold the hall to Leon Bolduc who operated a number of movie theatres in New Hampshire.

Initially there was no permanent projector and one was set up in the balcony each Friday and Saturday night. “Birth of a Nation” was shown, also Tarzan and cowboy movies. “Trail of the Octopus” ran one entire summer.

At some point movies were phased out and dances were the main attraction. Some were even attended by Rudy Vallee who had built an estate near by.

The hall was sold in 1945 and 1946 to owners who continued the Friday night dances and had Saturday movie matinees.

In 1947 the building was purchased by a group of returning WWII veterans who formed a post of the Veterans of Foreign Wars. They did extensive renovations and expanded the building.

Reportedly there were no indoor toilets, only outhouses, until 1960. Must have been challenging at the heavily populated dances.