Pipes In The Peaks 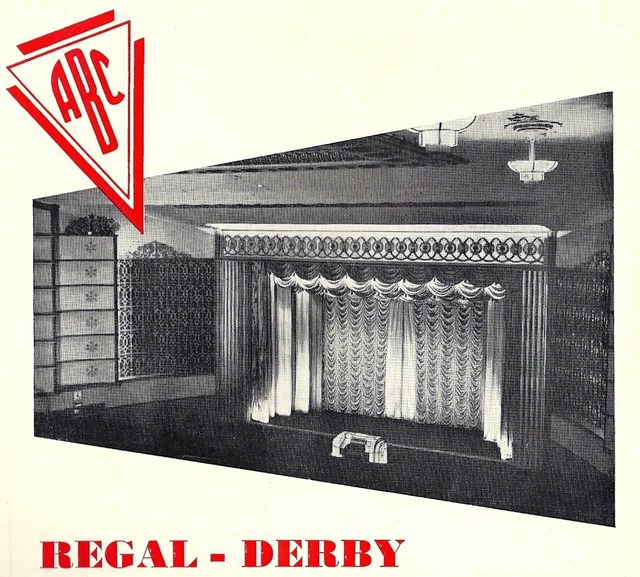 This was my local cinema when I grew up in Derby, it played all the big releases with the nearby Odeon(former Gaumont) on London Road.

I didn’t appreciate how beautiful its great Art Deco style façade was until I studied design at college, by then it was too late and the developers had moved in to clear the site to extend the shopping centre that surrounded it.

By this time I was working in a nearby bar after college and was able to document in photographs the whole sad demolition process, I also rescued several chunks of plasterwork from the grills in the ceiling.

The Regal Cinema opened on 27th June 1938 with Greta Garbo in “Marie Walewska”(“Conquest”). It was the most stylish cinema in Derby and was fitted with a Compton 3Manual/6Rank organ which had an illuminated console on a lift. The organ was opened by organist Wilfred Southworth. The Compton organ was removed from the cinema in 1965 after years of not being used. It still survives having been restored, and is now located in a car showroom about 20 miles away up in the Derbyshire Peak District, in the village of Dovedale (check the attached link for concert details of the organ and photos of the cinema).

The architect for the Regal Cinema was Associated British Cinemas(ABC) in-house architect William R. Glen who designed many similar cinemas for the ABC chain. The exterior was a curved cream Art Deco style ribbed faience tiled affair that was tucked in between shops fronts, a long lobby led back to the large auditorium that seated 1,248 in the stalls and 592 in the balcony.

As many of the other cinemas closed in Derby in the 1960’s, the ABC survived due to its prime location and was tripled in 1978, an expensive job. The balcony had a new screen built in front of it hiding the wonderful proscenium and ornate organ grills, the stalls were split into a large 380 seater and a small narrow 213 seater, both only retained a little plasterwork on the ceiling. The lobby area and upper circle lounge still retained lots of wonderful plasterwork, sadly painted deep red and purple so you couldn’t see much of it.

When ABC/EMI moved its bingo operation from the burnt down Trocadero to the former Odeon(former Gaumont), it also opened a single screen cinema in the former Odeon/Gaumont balcony, and for a while that was renamed Trocadero Centre. The ABC East Street closed on 14th July 1984.

I remember watching “Bladerunner” here with only three other people in the screen. The final regular programmed films were “Angel” & “Police Academy”. On the closing night it was packed for a final screening of “That’s Entertainment”. The building was swiftly demolished and the site became part of the new Eagle Shopping Centre.

According to Woody’s clippings, Angel and Police Academy were two of the final films shown.

In the 1970’s I did the Winter Relief there while the Manager was on holiday..

I took over here for a fortnight in 1976 whilst it was still a single auditorium – and a very impressive place it was throughout. The double width circle staircase alone conjured up images of Fred Astaire/Ginger Rogers musicals…..

The film showing the first week was ‘Aces High’ one of EMI’s films which floundered during the record hot summer that year although the returns were quite respectable in Derby. I recall the Manager of the Odeon (Gaumont) presenting himself at the main office upstairs to ask permission to see the film and I took him into the circle just as the house tabs parted onto the BBFC Certificate…..brilliant timing!

I cannot for the life of me remember what was showing the second week but I recollect vividly my last evening there which was the opening Sunday of HG Wells' ‘The Food Of The Gods’ and while I was standing in the main foyer I heard an almighty sound of cheering and guffawing coming from the stalls. Bearing in mind that there was a large stalls foyer between the entrance hall and the auditorium it had to be loud indeed. When I entered the stalls I discovered that the racket was in response to a scene of a poor unfortunate being stung to death by giant wasps…..such was Sunday night audience behaviour back then!

The conversion into three screens was carried out by Moorebird Ltd., They did a usually a cheap and cheerful job. that leaked sound badly …

I just heard that my Uncle, Albert Day, passed away April 1st 2017 in Derby. He played the organ at the Regal for many years I believe. He was invited to play it when it was restored a few years ago.

ABC Derby had 70mm until it was tripled.