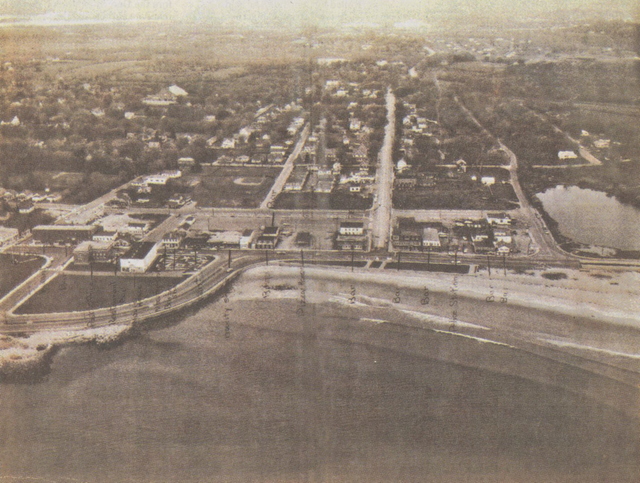 The Casino Theatre, was built in 1916. The theatre directly faced Narragansett Beach. The Casino Theatre was demolished by the early-1970s or so and a grassy park replaces the land where it once stood. It may have been formerly known as the Pastime Theatre.

As the Pier Cinema in March, 1970, one of the double bills was the adultish Russ Meyer program of Good Morning…and Goodbye! & Vixen.

Although this information doesn’t deal directly with the Casino/Pier, this is probably an appropriate place to post, since the Pier depot, with which this deals, was about a block away. A Providence Journal article of August 30, 1938 reported a planned movie show at the abandoned Narragansett Pier Railroad Station. I’ve paraphrased some of the information.

A group of men, having formed their own movie company, “S.P.E.”, had produced the feature film The Verdict, from a French play by Erckman-Chatrian called The Bells. Harold Thewlis, one of the members of the group, had the leading role. A second feature, Concentrated Vodka, an original comedy written and acted by the producers, would also be offered that week with showings on Saturday, Sunday, and Monday…and more if boxoffice receipts warranted. Travel films taken by the company during a European bicycle trip would also be featured.

I could uncover no information on these films, although other film versions of Erckman-Chatrian’s play can be found on IMDb.

The Casino Theatre became the Pier Cinema in 1967.

Here is an aerial photo of seaside Narragansett in the 1960s. On the left above the red X, next to the post office, you can seen where the Casino Theatre/Pier Cinema used to be. It is the long white building.

Item in Boxoffice Magazine, October 1, 1938 (after the hurricane)

There were unconfirmed rumors Saturday that the Casino Theatre at Narragansett Pier in Roode Island had been washed to sea.

From The (Providence) Evening Tribune, September 8, 1916: “Narragansett’s season is rapidly nearing its end, and departures are now the rule rather than arrivals. Social events are few and far between, and for lack of these, society here has taken to the ‘movies.’ The attractive new moving picture house at the Pier fills a long-felt want and the patronage from the cottage colony and hotels has been so large that practically every seat has been taken for the evening performances. Indeed, if one wishes to meet friends just now one needs only to go to the ‘movies’ at any time between 8 and 10 o'clock.”

CASINO THEATRE PHOTO IN 1941 MGM REPORT Thanks to Theatre Historical Society of America.