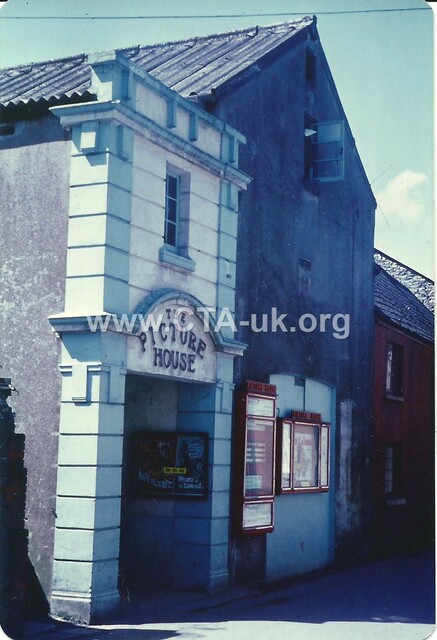 In the small town of Buckfastleigh, Devon, it is thought that its only cinema, the Picture House, opened around 1919; it is listed in the 1923 Kinematograph Year Book as being operated by A. O. Ellis, of Plymouth.

He remained there until the end of the 1920’s, when there could have been a short period of closure before William Pickles took over in the ‘sound’ era. A Mihaly sound system was installed, later replaced by an RCA system.

The proscenium was 18ft wide. The screen was originally 12ft by 9ft, but a CinemaScope screen, measuring 17ft by 8ft, had been installed in 1955.

In 1960, the Picture House closed. However, on 15th September 1964, it was reported that it had been re-opened by brothers Eric and Dick Sadler, and Eric’s wife Brenda, who said they did so because they enjoyed spending their holidays in the area. So they sold up (Eric and Brenda were living in Epsom, while Dick was in Ruislip) and purchased the Picture House.

They appear to have modernised the interior, at least, as the seating capacity was reduced, quite significantly, to 135.

Although they reported initial results as quite encouraging, it is not thought that the re-opened Picture House lasted very long; its final appearance in the Kinematograph Year Books was in 1968.

A search on Google Street View indicates the building has been demolished and the site is used as a car park.