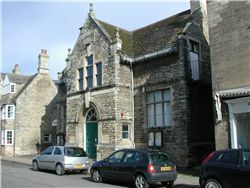 In Oundle a market town in north Northamptonshire, seven miles southeast of Peterborough, the Queen Victoria Hall was constructed in 1904 to commemorate the death of the late monarch.

Early cinema use has not been confirmed. The Victoria Cinema first appeared in the Kinematograph Year Books in 1935, but with only two shows on Saturdays, suggesting a part-time operation in a hall also used for other events and purposes.

This continued until 1944, when two shows were also presented on Mondays and Wednesdays, by Kinetours Ltd.

By 1948 P. J. Lintott had taken over. A seating capacity of 287 is shown in the Kinematograph Year Book, which reduces to 236 the following year.

By 1950 Oundle Urban District Council had taken over, and the seating capacity had been raised slightly, to 248. A GB-Kalee sound system was being used. This new ownership appears to have brought about a more permanent arrangement, as “separate shows, three changes weekly” replaced the Monday, Wednesday and Saturday screenings.

In 1954 the screen was said to be 12ft by 9ft, and the proscenium 18ft wide. This was upgraded in 1956 when CinemaScope was installed, using a screen that was 22ft by 9ft. The proscenium was extended to 25ft. Surprisingly, the seating capacity increased, to 285.

The Victoria Cinema is shown as “Closed” in the 1963 Kinematograph Year Book.

Presumably the Queen Victoria Hall continued, at least initially, in other uses. However, by late-2003, it had fallen into such a state of disrepair that there were calls for it to be pulled down.

Happily, following a meeting of the Hall’s Trustees in January 2008, approval was given to proceed with a major refurbishment project that has allowed the Queen Victoria Hall to continue to provide a space for community use.