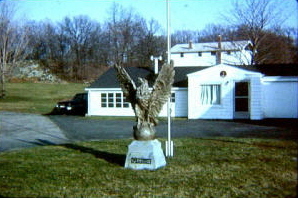 The Bijou Theatre was opened on December 25, 1908. The theatre was demolished in December 1963.

Here are two photos relating to the Bijou:

This first photo shows Main Street in 1920 with the Bijou on the right just beyond the bridge. Note the white dome and the figure atop it. It is an eagle.

This second photo shows that eagle now serving as a souvenir on a local lawn.

The 1949 Film Daily Yearbook gives the seating capacity as 879. I was told by someone who used to vist the theatre that it had a balcony.

Here is an old postcard view of North Main Street with the Bijou Theatre seen on the right. The card was mailed in 1912 and probably dates from around 1910 or a bit earlier. Expand image for more detail.

Only two theatres in Woonsocket ran first-run movies. The Bijou ran Fox, Universal and Columbia. The Stadium ran Paramount, MGM, Warner Bros and Republic. The Rialto, Olympia, Park and Laurier showed the same product in second-run. On occasion the Laurier would run French language films. Regardless of release dates, they were probably first run for Woonsocket. Generally, a first-run movie would play Woonsocket about a month after it opened in Providence. Woonsocket was a Double-feature town. The second features were usually one-hour low budget films from Allied Artists, United Artists, PRC, Monogram, and a few Independents.

“On the other end of Main Street, where Chan’s Restaurant is now, was the Bijou Theatre, referred to in some local history books as the Electric Theatre. It was a house of worship before becoming a vaudeville and movie house.

“The Social Methodist House was moved a block near the turn of the century to 273 Main St. to make way for a new post office. In 1912, to the church auditorium was added space for a stage and wings, and the building leased to famed theatrical figure Edward Albee. Stock companies, vaudevillians and movies played there.

“The Bijou was hit twice by fire. The second, November 23, 1936, closed the theater for 13 months. It closed again in 1952 because business was off, reopening weekends only in 1955, but dark for many months at a stretch before its demolition began the final day of 1963. It’s last owner was U.S. Sen. Theodore Francis Greene.”

The Bijou, Woonsocket, put on an 11:30 p.m. defense workers show during the run of “Crash Dive” last week. Newspaper ads invited workers to “Come as you are—-Don’t Change Yur Clothes.” Stunt brought out a good-sized audience.

An article on the 1925 fall season opening of the Bijou with programs of movies and vaudeville appeared in the August 16, 1925 issue of the Evening Tribune. CLICK HERE.

The Theatre Historical Society archive has the MGM Theatre Report for the Bijou, it’s Card # 561. There is an exterior photo taken May 1941. The theater is in Fair condition. It was over 15 years old and was not showing MGM films. The seating is listed as 1,500.