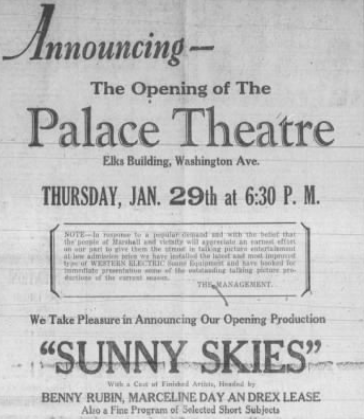 The Palace Theatre opened on January 29, 1931, with Benny Rubin in “Sunny Skies” along with a few selected short subjects. The Palace Theatre is located at the Elks Building on Washington Avenue. Many Marshall companies have done all of the work for the theater itself, including the Howell Electric Company who did the lighting. The Moving Picture Machine Operators Union (Local #587) had chosen to install Western Electric sound equipment and Simplex projectors. However, this theatre was approximately short-lived. The Palace Theatre during its last years then showed B and western films before closing its doors in 1942.