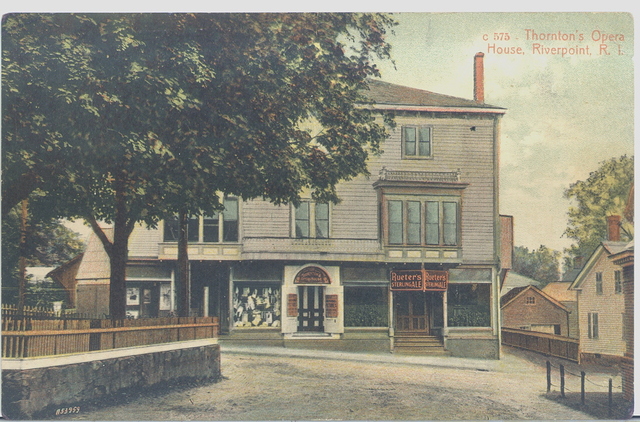 A village theatre in the River Point section of West Warwick. Thornton’s Opera House was opened in 1895 and was destroyed by fire in 1910. A new theatre was built and it survived into the 1960’s, and was demolished in 1968.

June 12, 1939 Pawtuxet Valley Daily Times Newspaper Owen B. Thornton, in Theatre Enterprise 39 Years, Believed Dean of Rhode Island Theatre Managers. Owen B. Thornton of Riverpoint believed the oldest theatre promoter in RI in point of years in the enterprise, started Thorton’s Opera House an Main street in 1895 and still is on the job. He was associated with his brothers, the late James Thornton, the firm being known as Thornton Brothers, James died 13 years ago and John the following year. The first motion picture to be released by producers, one-reels were shown at the Thornton’s Opera House. The Bio graphs, Essanay’s and Seligs were the oral companies making the silent films. A year after the introduction of the moving pictures the two-reelers made their appearance. The first movie show at Riverpoint was a three reels, together with illustrated songs by William Delaney, tenor and vaudeville. “The Fencing Master” The first professionals to come to Thornton’s were the Gorman Boys who entered the Valley via Riverpoint train station. Such light operas as “The Fencing Master.” “Robin Hood” and “Pinafore” were presented by high grade talent at Riverpoint, including Julia Tracy, noted soprano. “The Fencing Master,” the first light opera here was an outstanding show in it’s day, the presentation being in 1895. Many outstanding stock companies came to Thornton’s. in 1910 the opera house was destroyed by fire and temporary shows were given at Temperance Hall, and later a building was constructed on the back portion of the lot containing the ruins, and here shows were held until the present structure was completed.

I have photographs of both Thornton’s Opera House and photographs of the fire. I’d like to show them to you but I don’t know how to add them to this layout. If you wish to have a free copy contact My name is Brian Edmund Guiot. Happy to help out the movie fans!

Buffalo Bill, Jr. Big Hit Treat on Thornton’s Slate! “The interfacial Gent” which presents Buffalo Bill, Jr. at Thornton’s all week starting tomorrow was adapted from “Circle D. Borrows and Owner”, one of the best stories ever written by Rauge Rider and certainly one of the best in which the star has appeared. When it was published in Western Stories Magazines every star of Western dramas seemed to be after it. Bill obtained it solely because the author was glad to provide him with a story he liked-which looks like a nice way of stating that other stories, not so true to genuine ranch life. may be sold to other stars who do not know what genuine ranch life is really like. “The Interfering Gent” was adapted for the screen by Betty Burbridge and Frank Ingram, and the supporting cast include Olive Hasbrrouck, Harry Todd, Jim Corey, Walter Maly, Harry Behmour, E. W. Broman and others. Richard Thorpe directed.

Note the building next to the Thornton’s Theatre a vacant run down building, used to be the former Omer Duquette V. F. W. Hall just caught on fire, a total loss on May 22, 2015.

NICE INTERIOR PHOTO OF THORNTON’S THEATRE This looks like it was taken during the silent movie era. Thanks to Brian Edmund Guiot.

Gerald, might I suggest you add images to the photo section. Links tend to be broken over time.

Hello, I have more photos of this theatre. Photos of the fire in 1910. Photos when they rebuilt the theatre and photos of when it was torn down for the second time. I have an interior photo too. Been collecting a lot of information on West Warwick theatres and I have tons of stuff to add. I have info on other theaters that is not listed in the Natick village of Warwick pre 1913. I have photos of that too. Tell me how to install the photos. I did work on here in 2015, but I forgot how to add more info and photos. I have some real good stuff to add, please contact me. My phone number is 401-823-7499. Brian Edmund Guiot

Most of the photos were supplied by me in 2015. Glad that I could help~ Come visit my web site @Brian West Warwick & Coventry History Brian Edmund Guiot Will be adding more to this site very soon.