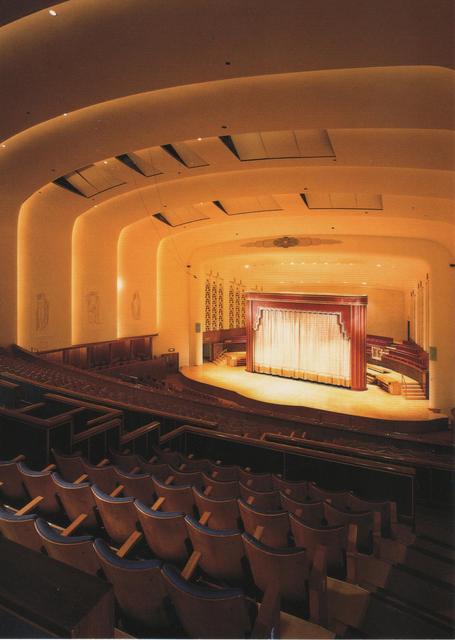 A stunning Art Deco auditorium - one of the finest remaining in the United Kingdom - is the home of the Royal Liverpool Philharmonic Orchestra.

It was opened in 1939 having been designed by Herbert Rowse with window panels by Hector Whistler.

The auditorium ceiling and walls step down towards the front with concealed lighting within each step. Down the rear half of the side walls are several private boxes, whilst towards the front are three wonderful Deco figures on each side.

The foyers and bars are also pure Art Deco in design and are simply amazing.

The hall was built as a free standing concert hall but from the start had, and it is still functioning, a unique 1939 cinema screen (7.17mtrs x 5.33 mtrs) which rises up through the platform stage by way of a mechanical hoist. It was equipped with both 35mm and 16mm projection facilities

The Hall had a major refurbishment in 1995. As well as concerts by the R.P.O., there are regular film shows of a mix of classic, modern and occasionally, silent films (accompanied by the Orchestra) play at the Philharmonic Hall, usually for one night only, and are extremely well attended. If you are ever in the North West of England this is well worth making a detour for!

The Philharmonic Hall is designated a Grade II Listed building by English Heritage.

The Philharmonic Hall is also equipped with a Rushworth & Dreaper 3 Manual concert organ. It was originally opened by noted organist Quentin MacLean in 1939. The organ is still played prior to the start of regular film nights at the ‘Phil’.

These include a fully equipped projection booth (35mm & 16mm), a (now)unique Walturdaw unit weighing 7 Tons, that consists of a screen and a decorated proscenium equipped with screen curtains, which is housed below stage and rises up from beneath the stage (Only 3 were manufactured, one installed in St. Petersburg, Russia and the other in an Arab state, neither of which are thought to be in working order today). The concert organ is also installed on a revolve lift which can be played under stage or at stage level.

Regular screenings of Classic movies occur every few weeks and the entire building has the ‘look’ of an art deco Odeon style cinema of the 1930’s with concealed lighting hidden in troughs and rib coves in the ceiling and walls and a typical cinema look exterior. All fixtures and fittings from door handles to etched glass panels and light fittings are original to the building, which qualified it to become a Grade II Listed building.

OK, it may not be a ‘purpose built full time cinema’, but physically, it sure is a good representation of one and being it still continues to screen movies, it deserves to be listed here on Cinema Treasures.

Films being screened over the next few months are; “Liverpool Film Festival” – ‘Archive Film Evening’, “Lawrence of Arabia”, “The Mighty Celt”, “A Very Long Engagement”, “Millions”, “It’s A Wonderful Life”, “Pride & Prejudice”, “What Ever Happened to Baby Jane?” (as part of the Liverpool Lesbian & Gay Film Festival), “Vertigo”, “Rear Window”, “North By Northwest”, “The Birds” and “In Search of Mozart”

All this and an organ pre-show concert too.

An auditorium view from the front stalls here:
View link