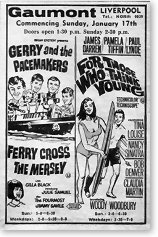 Designed by architectural firm Messrs T. Taliesin Rees & Holt and opened for Provincial Cinematograph Theatres(PCT) on 13th April 1922, the Trocadero Super Cinema was a particularly lavish and unusual cinema. Either side of the proscenium arch for the screen was an additional stage, about half the width of the main stage, on which beautiful scenes were created and were illuminated during the intervals.

There was a single balcony and a particularly wide barrel vaulted ceiling. Elegantly restrained plasterwork decorated the balcony front, the ceiling and walls, in addition to that framing the three stage arches. The Trocadero Super Cinema was equipped with a Wurlitzer 2Manual/6Ranks organ, which was transfered to the Gaumont, Dingle, Liverpool in March 1937.

PCT had become part of the Gaumont Circuit in February 1929, and on 18th September 1950 the cinema was re-named Gaumont. The unique three stages disappeared in 1954 when Cinemascope was installed.

However after Gaumont were taken over by Rank Organisation, the importance of this venue diminished and later when the Odeon was twinned then quadrupled the Gaumont became surplus to requirements and closed on 4th May 1974.

It became a snooker hall which in turn closed and after a period of dereliction the building was declared unsafe and demolished. A rough car park is now on the site.

The projection box was equipped with Kalee 21 equipment with Gaumont Kalee President carbon arcs. For many years one of the projectionists was a Desmond McGreal, known as Des. When the Gaumont closed he moved over to the Odeon. Sadly Des is no longer with us.

I bet KenRoe would know,if he did,I guess he would have added that info.

Although i’m from Pwllheli in Wales and still live there,I have many relatives in Liverpool and had been to many of the city center cinemas by the time I was 11 or 12 during the 1950’s.
These included all three in lime Street as well as the Tatler,also The Palais De Luxe & the Clayton Square News Theatre.

But alas not the Gaumont,well not that I can remember anyway, here is a not to sharp a photo from the mid nineties.
View link

Thanks for the photo Eric.

John, Paul, and George usually went to the Gaumont Allerton (later Classic Allerton) near Penny Lane. It was the closest to John’s and Paul’s homes, and George would meet them there. Ringo wasn’t with the band yet, so he’d spend his afternoons at the Gaumont Dingle and an unlisted cinema in his area called “Barris.”

But… this DOES have a major Beatles connection, because John’s mother worked as an usherette here before she married John’s father. From Philip Norman’s biography of John:

[Julia] quickly gave this up to become an usherette at Liverpool’s plushest cinema, the Trocadero in Camden Street. Like Alf’s role at sea, it was a life of glamour by proxy, working amid deep pile carpets and soft lights, clad in a trim Ruritanian uniform with cross-buttoning tunic and pillbox hat. Her looks won her many admirers, and even the manager of the Trocadero, a magnificent personage who wore evening dress all day, also made periodic attempts to woo his prettiest usherette by leaving gifts of stockings or chocolates in her locker.

And Garston Empire and Abbey Cinema have also been mentioned in relation to the fledgling Beatles, but the Allerton location was central to all three (pre-Ringo) at the time. Other than John’s mother working here, I haven’t found any reference yet to them going to the Gaumont Liverpool, though. I’ll keep my eye out for it. There’s lots of books to read.