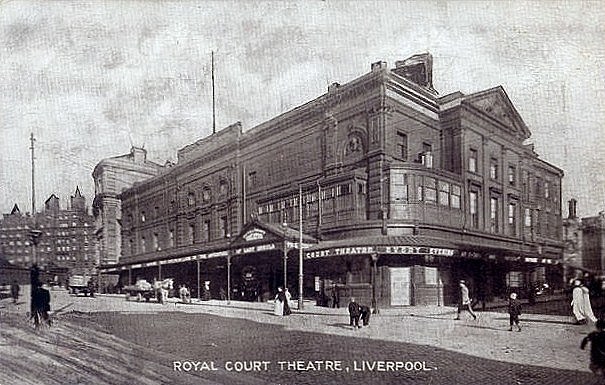 It was opened for Howard & Wyndham Ltd. and had been designed by James B Hutchins.

An elegant theatre on three levels, it was noted for its excellent sightlines and superb acoustics.

By 1971 however there were insufficient touring companies to keep both the Royal Court Theatre and the larger Empire Theatre fully programmed and so Howard & Wyndham had a projection suite added to the rear stalls area, with the loss of over 80 seats, and, sub-letting the theatre “for up to six months per year” to Hutchinsons Cinemas Ltd. of Burnley, embarked on a very successful season of films over the Summer months.

Even this was not enough to save the theatre and in 1976 Howard & Wyndham offered the theatre for sale. It struggled on until 1979 before closing.

Re-opening the following year it once again struggled to survive and by the end of 1981 had become principally a rock concert venue. This has enabled the theatre to remain open and has permitted some extensive refurbishment, which has included the removal of the projection suite.

The Royal Court Theatre has had extensive and imaginative plans drawn up by architects Allford Hall Monaghan Morris for a thorough restoration and extension to the theatre costing Â£10,650,000 spread over four phases. The first of these is a restoration of the auditorium to it’s original 1938 design, colours and concealed lighting scheme. Then a new entrance foyer will be constructed to relieve the very cramped existing box office. The final two stages are Vertical Connection to link all areas of the theatre followed by a new venue on the roof, commanding “stunning” views across the Liverpool skyline.

Night shot of the Royal Court:–