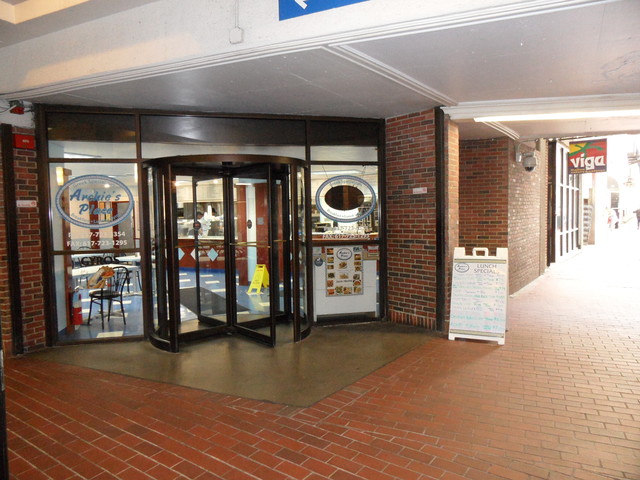 Opened on December 17, 1969. It was twinned in 1978. Cosy, down an alley off of Washington Street apparently named for pi newsprint type dumped in the alley. Now a bar?

According to Donald C. King’s new book The Theatres of Boston: A Stage and Screen History, the Pi Alley opened on December 17, 1969.

King’s book also states that the Pi Alley was twinned “soon” after opening in 1969. The theater was subdivided in 1978.

Eric… <<King’s book also states that the Pi Alley was twinned “soon” after opening in 1969.>> Hmmm, well, if his theater history begins around 1620 (venues for Pilgrim morality plays), I suppose, to the author, the nine year span to 1978 could be considered “soon.”

I never went into the Pi Alley, but from the mid-1970s to mid-1980s I walked thru Pi Alley almost every weekday morning around 815AM and the fire exit doors were sometimes open while cleaning was underway. The doors were on the south side of the alley about half way in.The auditorium (I only saw one) was the epitome of “plain”.

For those unfamiliar with this cinema: in the very nice color photo posted above by Howard Haas, the original poster cases can be seen on the right and left just inside the opening under the marquee. The cinema was just a short distance up the alley, on the left side. In the distance you can see daylight at the east end of Pi Alley.

Correction to the above posting: “ you can see daylight at the West end of Pi Alley.”

I too saw Tommy in Quintaphonic Sound at the Pi Alley in two consecutive showings. Those days, they didn’t kick you out between shows.

It’s funny almost all of the theaters Sack Theaters developed were built into parking garages. Seems to have been a lot of garages built in Boston as part of the 1960s urban renewal projects. The Cheri was a stand-alone garage. The 57 was in the garage part of the 57 Hotel. The Beacon Hill was butted up against the One Beacon Street underground garage. The Pi Alley was in the Pi Alley garage. I think the only Sack Theater not in a garage was the Copley. The other theaters Sack bought from other companies.

In the mid 80’s, the Pi Alley was where my wife and I went to see Nightmare on Elm St. and The Evil Dead II. Good times.

The building which contained the Pi Alley cinema is to be demolished at some future date so that the parcel can be “redeveloped”. I learned this from the business news in the Boston Herald.