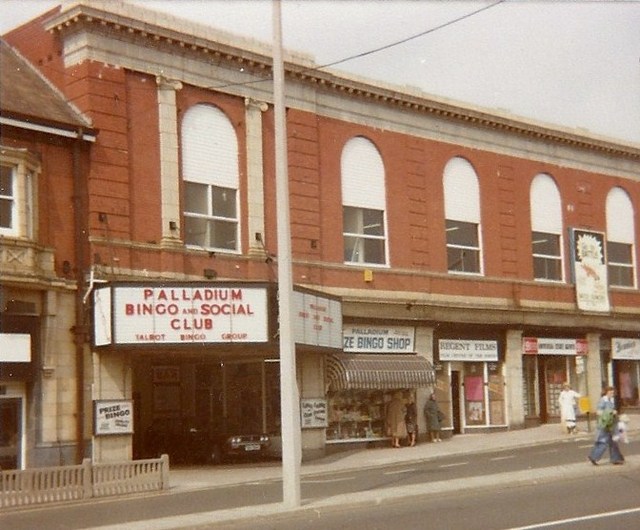 Located on Waterloo Road at the South Shore of Blackpool, not far from the Pleasure Beach. The Palladium Super Cinema opened on 16th April 1928 with Ramon Navarro in “Ben Hur”. Initially an orchestra accompanied the silent films, and in 1930, it was fitted with a Christie organ which had 2Manual/7Ranks which was opened by organist George Tootell.

Seating is divided between stalls and balcony, with much use of fibrous plasterwork on the side walls, balcony front and barrel vaulted ceiling.

A café used to exist at first floor level running along the Waterloo Road frontage, and a charming foyer runs the full width of the building with entrances on each of the roads. The Christie organ was removed in the early-1950’s. In later years the Palladium Cinema used to attract the long running blockbuster films -“The Sound of Music” ran for 46 weeks here in 1965.

The Palladium Cinema was closed at the end of 1976. It was converted into the Palladium Bingo Club, and was later re-named Apollo Bingo Club. The circle is intact but disused.

The Apollo Bingo Club was closed in September 2009. In 2012, a local businessman purchased the building and began renovations to convert it into a live performance and cabaret venue, with a planned 2013 opening. By 2018 the upstairs was a boxing training area and the downstairs was a pizza restaurant.

I had a chance to view the interior on Saturday June 12th 2004 during the evening session of Bingo.

The stalls have been covered by a false floor to cover the shallow raking of the stalls, much of the original plasterwork survives ( despite some more modern attempts to blend in similar design elements ). Most notable are the Ventian lion friezes on the walls of the auditorium – what’s the connection there I wonder?

Despite not being in the use the balcony area is still accessible and I was able to wander around unchallenged. Perhaps because of the heat the door to the projectionists box was open at the rear upper of the balcony. passing through this revealed that the wall at the back of the balcony is false with several stepped rows still thier from which the seats had been long removed. The projectionists box, accesisible via a strong steel fire door, was empty – as expected.

The downstairs foyer area, which has two accesses on either side of the building still retains a lot of charming original features particulary the doors.

The location is slightly off the main road so conversion by a large pub chain is probably not on the cards – well worth a visit though you will have to join the club ( in line ) 24 hours before Bingo is in play.

The “Eyes Down” episode of “The Peter Kay Thing” was filmed here.

A couple of interior pictures (as a bingo hall) here:–

for vintage photo of auditorium scroll down:
View link

Page 14 of brochure linked above.

What a surprise to see something about the Palladium. I worked there from 19662 until I joined the Navy in 1967, as the second projectionist under Ronnie Gregson who was the Chief Projectionist/Assistant Manager.It was a fabulous place to work and I have never forgotten it. It was a very happy time of my life and the staff were great. The projectors were the top of the range at the time – 70/35 mm CineMechanica Projectomatics from Milan. They ran at dual speeds of 24 frames per second and 30 frames per second, for the odd film still around at that speed (Oklahoma being one of them), and had both optical sound and 6 track magnetic stereo sound all powered by the reliable Westrex Sound system. We used to specialise in “Roadshow” film seasons – My Fair Lady (26 weeks), Lawrence of Arabia (26 weeks)and, of course, The Sound of Music (46 weeks)for example. I saw that about 11 times each week!! The manager was Mr. Spencer, a lovely man and my good friend Harry Hunt was the doorman – he could tell some stories!! So to sum up it was a great place to be and there are lots of wonderful memories that I still have. What a shame that all the cinemas that Blackpool used to have are no longer around. Great times! John Senese

The bingo operation is set to close.
I wonder what fate awaits this unlisted building?http://www.blackpoolgazette.co.uk/blackpoolnews/Blackpool-bingo-set-for-final.5606060.jp

The bingo has now closed.

I have loaded a better view… taken some years ago now…

Upstairs is now some sort of boxing club while Pizza Hut occupy part of the ground floor area.