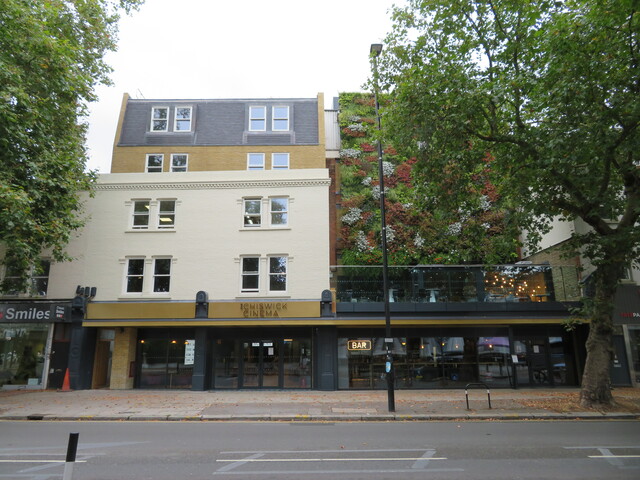 Located in Chiswick, a district in the west of London. The Chiswick Cinema opened on 25 June 2021 and is part of the Trafalgar Entertainment Group and home to Trafalgar Studios and other associated organisations. Originally destined for the Picturehouse chain it occupies the former Ballet Rambert studios and took two-and-a-half years to complete, with progress being held up by both squatters and the Pandemic.

There are three main screens seating around 100 patrons in each with two smaller screens, one being a private screening room which seats 15 people. One of the features of the cinema is the Members’ Terrace with its ‘Green Wall’ containing over 5,000 plants. There is also a members’ bar and café-restaurant. It is an eco-conscious venture which does not provide single-use plastics for its food and drink. In addition to mainstream films there will also be live broadcasts from the Met Opera, Bolshoi Ballet and National Theatre Live.

The cinema is part of a building that also includes luxury apartments.