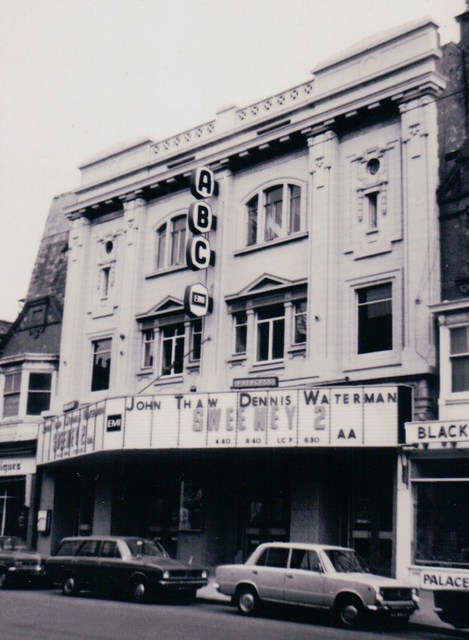 A conversion of the Swiss Roller Rink, the Princess Electric Theatre opened on 12th December 1912 with 905 seats, it was enlarged to the designs of architect Halstead Best, and reopened as the 1,770-seat Princess Cinema on 10th July 1922.

It was taken over by Associated British Cinema(ABC) in 1929 and was in addition to their Hippodrome Theatre (Church Street) a former live theatre which continued under ABC to present summer shows, leaving the Princess Cinema the pick of the circuit’s films. This continued after the Hippodrome Theatre was largely demolished and a new ABC theatre constructed, as the new ABC also had a frequently used stage. The Princess Cinema (aka ABC North Shore) was equipped with 70mm and played roadshow films in the 1970’s.

However after the ABC (Church Street) was tripled in 1981 the Princess Cinema became surplus to requirements and was closed.

Used as a Punk music centre,which later closed. In 1982 it became an indoor market, and a ‘street’ of bars followed but more often than not the building was closed. The attractive Hathernware faiance tiled facade is now looking uncared for but the building has had a new roof in recent years.

It became the Bizness nightclub in October 1992, then the Waterfront nightclub in the late-1990’s followed by Sanuk nightclub and finally Club Domain which had closed by 2017. There are plans to use the building for storage.

Well, if I did have any notion to see the recent ‘Ben-Hur’, I now know, after what you have said, not to bother!

In the space below I have added some links ( I tried pasting them here but they were impinging upon page layout).

The media were at Ryhope Grand today and my old friend, Bill Mather was interviewed by no less than seven journalists from TV, Radio and the Press.

Also of interest, I hope, is the current restoration of the ABC Stockton which is quite close by. One of its many claims to fame was the fact that The Beatles played here on the day that President Kennedy was assassinated in 1963.

Part of the second video shows the ABC (Globe) back in the 1960’s with the heavy house tabs opening onto a stage musical extravaganza. If they are going to fit replica curtains they will now cost tens of thousands of GBP as they were heavy bullion carrying maroon velvet.

A deceased friend of mine, George Skelton was Manager for many years. He, incidentally , took over from Gordon Chadwick who became General Manager of the ABC Blackpool. What a pity that, in contrast to Stockton, it was not saved. Sadly, however, Fylde (Blackpool) Council allowed the nightclub owners to totally rip out the interior of the building, the ‘tripling’ of which was totally reversible.

Finally, some fragments of the Kings, Bishop Auckland (my Home Town) have been discovered. They have not been seen since the 1960’s

The middle link, unfortunately, overlaps the margin and cannot be copied but if you simply do a search for ‘Globe Theatre Stockton’ it should be in top position.

Thank you very much for your response and those interesting links. I found very interesting photos from inside the “Globe” Theatre Stockton plus a little Clip. What a beautiful place this is and it’s only right that it’s been given the chance for restoration. Isn’t it lovely to read and hear about restoring those remarkable places like the one mentioned for a change? Also very interesting what has come back visible inside the former “Kings” Cinema/Bishop Auckland.

I was so touched by the little clip of Billy Mather’s visit at the Grand Cinema/Ryhope. Commenting this visit in his own words and his emotions clearly visible in his face whilst at the “Grand”….I can only say I can truly comprehend it. Two years ago I had the chance to visit “Schwefelbad”– Cinema again, which I had last seen inside as a school- girl at the time of closure (1968/due to TV). Although this Cinema (built by my Great-Grandfather) was not really my favorite place to see movies ( “BALI” was more favorited)I was really looking forward to this permission visit, which was arranged by a journalist who made an interview with me about the Cinemas History.

The Auditorium had to face some alteration through the last decades because of it’s use as a dancing-school, but through the suspended false ceilings I looked up to the original auditorium – lights and had a look at the original circle again and insisted to visit the front row up there, where we always sat. Standing on the former huge stage (the Cinema was also in use for theatre-plays and concerts/ a venue), I could make out the orchestra-pit, which the council of Balingen destroyed by filling it up with cement(!!) – a pitty really. Not only could I clearly make out the big Screen behind me (which isn’t there anymore)but also the two sets of dark-blue velvet curtains/Tabs (which were always in use in times of screening movies :) ). And specially on the stage I could make out that familiar smell…..I think I had been taken back in time somehow. I must have taken dozens of photographs and thinking back to this very cold afternoon in February 2016: An unforgetable experience.

Have a wonderful visit at the beautiful “Grand Cinema” tomorrow.

Sorry, for that “excurse in time” that I commentend in detail yesterday, as I seem to be literally “taken away” by this experience.

Watching the clip about the visit to the beautiful “Grand” – Cinema of your friend Billy Mathers, I of course still realized that the false ceiling had already been removed. And what has come back visible again. So interesting. I hope everything goes well with desmantling the building brick by brick – which will be a highly delicate process.

I hope you have spend an interesting time with your friend at the “Grand” and your visit has been an enjoyable one.

I would very much be interested about your impressions at the “Grand” Ryhope – visit, so if you have time – please tell me about the “brief encounter” of the “Grand”.

Thank you very much in advance.

Saturday morning at the Grand was very interesting and it was very uplifting to hear all the big plans for the cinema when it is finally up and running at Beamish. It is expected that it will take two years to dismantle, transfer and rebuild.

Re the ceiling. When I heard that the false one had been removed ( a feature of its Bingo days) I imagined that, given the ornate style of the place,the original ceiling would be arched or barrelled – but such is not the case as it basically follows the contours of the main roof.

I did ask Bill if this had always been the case with the roof trusses visible and he replied that it had indeed been the case and that , in his opinion, it always appeared not to have been properly finished .

I have to say that the ornamental plaster-work is far more elaborate than would usually be found in a cinema of its type – in particular that on the front of the circle balustrade. Perhaps there was an ‘overspend’ there and economies were made with the ceiling! Interestingly, the original houselights are still up there albeit thickly coated in decades of nicotine and dust. These, like the splay wall stained glass features, are to be carefully lowered and restored.

We did not have access to all parts of the building. The circle was ‘out of bounds’ as there are some loose stairs and steppings. The projection box was also not accessible as it is currently used as a storage area for seats….. The projection room is unusual being in the rear stalls and there were no complete rows of seats in this part of the house. The ‘box’ is in the centre with part rows at each side. Bill tells me that the projection room was transferred from the rear circle in the 1930’s and I do not know why this was done; it would seem to me that perhaps when ‘talking pictures'were introduced a general ‘makeover’ took place.

I had my photo taken whilst sitting in one of two cinema seats which have been reupholstered . These, plus all those to be installed, are from the former Durham Palladium which was one of my favourite childhood cinemas. It was recently demolished to make way for new student accommodation, Durham having one of the country’s top Universities (after Oxford, Cambridge and St Andrews). The Kalee 19’s from the Palladium, I am informed, have also been rescued although Beamish advise me not by them ….

One day, Christina, we shall be admonished for using the Princess Blackpool’s page for these communications but, in the absence of anyone providing any further information about the place (in particular some interior photos), I don’t think that they can say very much.

Suffice to say, however, that a former friend and Manager of mine (from the huge ABC Wigan) passed away recently at the age of 81. Whilst the ABC (Ritz) was being subdivided in 1977 ( 2 cinemas in the circle , one in the restaurant and – guess what – Bingo in the stalls), he was based at the ABC Theatre, Blackpool and during this period he was deployed at the Princess for two days a week. The Summer Season Show at the ABC was Les Dawson and Kenneth McKellar while the Princess was doing an ‘alternate week’ film policy starting on Thursdays. I cannot recall the films showing there for that season, sadly.

Terry & Christina: Though very interesting your 23 comments are way off topic for the Princes Cinema, Blackpool. Please keep them to yourselves via private e-mails or post on the relevent theatre pages. Thanks. Ken Roe, Volunteer Theatre Editor.

Thanks a lot for your recent informations.

It’s been some very interesting, fascinating weeks of “conversation” on this site, even so not exactly staying topic. I guess this happens with people who have dedicated their life and profession to CINEMA.

And still… nobody seems to be able to post interior photos from “Princess Cinema”.

My e-mail address if you wish to keep in touch:–

The Princess was a conversion of the Swiss Roller Rink.