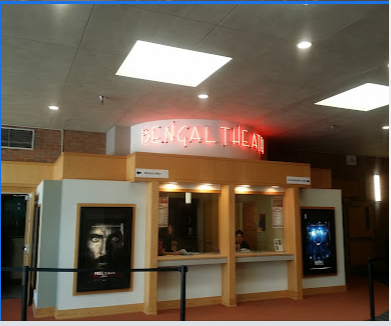 The Bengal Theatre, named after ISU sports teams, is open to the public for a nominal charge with students free. The theatre is student funded and operated with reasonably priced concessions.

The theatre is the home of the Pocatello Film Society, formed in October 2006 as the ISU Alternative Cinema Circle by a group of ISU students. The Journal reported the name change came in 2010 to reflect a community involvement.

The Film Society selections are not normally available at Pocatello’s Reel Theatre or the AMC Theatre in Chubbuck. Not solely an art house, they have shown “The Bourne Legacy” and a “Lord Of The Rings” marathon. At other times the Bengal Theatre shows mainstream movies that may or may not have already played locally.

The 300 seat theatre went through a remodeling in October 2019, adding among other upgrades a new screen.

The Journal noted after an extended closure, due to Covid-19, the Bengal Theatre reopened March 19, 2021. The theatre had closed in October 2020 and in the meantime had been streaming films.