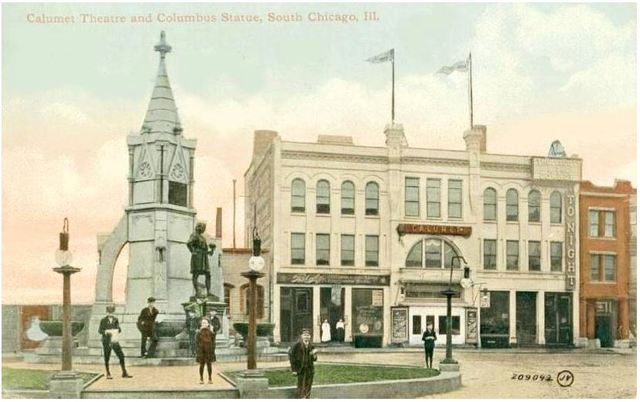 The Calumet Theater was built in 1905, designed by the firm of Oscar Cobb & Son, and located in the South Chicago neighborhood of Chicago, on S. Chicago Avenue at E. 92nd Street. This 950-seat theater originally was a vaudeville house, but later began showing movies as well. It lasted into the 1930’s, and has long ago been demolished.

It was located just across the street from the Drake Memorial Fountain (which still stands there today) and has a more interesting history than the theater that stood near it.

The fountain was originally located at the third Chicago City Hall & Cook County Building in the Loop, erected there in 1892 to commemorate the Columbian Exposition (the fountain includes a bronze statue of Columbus looking at a globe). It was a gift to the city from businessman John Drake. When the Chicago City Hall & Cook County Building were demolished in 1906 and replaced with the current building, the fountain was moved to a tiny circle of land in this unlikely spot in South Chicago.