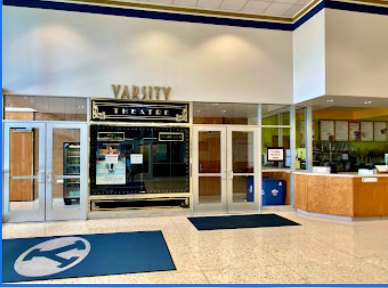 Located in the Wilkinson Student Center at Brigham Young University, the 900-seat Varsity Theatre opened in 1964 and is student operated.

The Daily Universe reports the Varsity Theatre shows Hollywood films at student friendly prices, that being $1 dollar. It was noted the Varsity Theatre “only shows the theatre and commercially released versions of movies” and have to be licensed at a flat fee or 50 percent of sales.

The Provo Daily Herald reported in June 1973 that a four person committee previewed films before shown. If offensive scenes can be removed without harm to the plot, they were shown. Some of the rejected films were “Patton”, “The Godfather” and the “The Cowboys”. “Dr. Zhivago” was allowed because it did not glamorize adultery.

Up to 1998 the Varsity Theatre had a policy of editing objectionable scenes from films like “Titanic” without the studio’s permission. The Salt Lake Tribune reported that in 1993 ‘“Schindler’s List” didn’t show because Steven Spielberg refused for the film to be edited.

The Provo Daily Herald reported September 3, 2001, that the theatre was closing because of plummeting ticket sales after they stopped showing edited films. As the Tribune described it, the long lines stopped “after movie studios and distribution companies pressured the theatre to stop editing from the films what university officials and Varsity patrons considered objectionable content.” Many of the films shown were already edited for the airlines but the Varsity Theatre did some more snipping.

On February 23, 2005, the Deseret News reported, “Varsity making comeback with clean flicks”. It was reported the administration had given permission to open again. They said, we will not accept any edited movies, we will not edit them ourselves and we must preview all the movies to make sure they meet BYU standards.

Classic movie buffs would be interested in a 3D double feature that played in June 2008. It was “Creature From the Black Lagoon” and “Revenge of the Creature”, with 3D glasses and free popcorn included. Ticket cost: $3 dollars.

Contributed by Ronald A Pierce
Get Movie Tickets & Showtimes