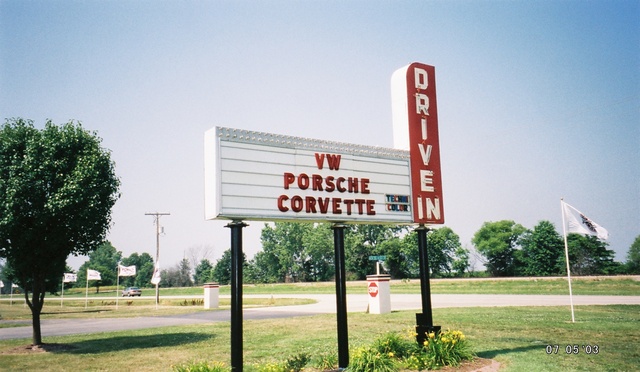 The Rustic Starlite, also known as just the Starlite Drive-In, opened in June 1950, and was located along Route 40 East in Effingham. The drive-in could accomodate 400 cars, and was part of the Frisina Amusements chain. It closed in the early-1980’s, and has since been demolished to make way for a construction company.

Its classic lightbulb-studded marquee was saved, however, and moved to an auto dealership in Effingham, which it still stands in front of today, used for advertising.

EFFINGHAM, ILL.-The 750-car drive-in being constructed for Frisina Amusement Co. of Springfield, Ill. on Highway 40 about one mile east of the city limits will be opened early in June.

The drive in sign seen above is on our corporate campus, 2 miles north of Effingham on N Rt 45 at Mid America Motorworks. Web addy is www.mamotorworks.com for directions.

A more accurate address for this theater is now 1406 E Fayette Ave, Teutopolis, IL 62467. This points directly to the drive in itself. Most ramps and structures are still there.

The Herald and Review of Decatur IL ran a lengthy article on Feb. 27, 1982, profiling the Rustic and its owner, Mike Stephens. It said the Rustic was opened “about 1949” by the Frisina chain, which sold it to Stephens and his wife in late 1980.

“The Rustic was opened quickly, and gravel had to be added later to its parking lot. ‘They had quite a bit of trouble getting the land to settle,’ Stephens recalls, and several customers' automobiles got stuck the first week and had to be pulled out.”

Boxoffice, June 23, 1958: “EFFINGHAM, ILL. – The screen tower of the Rustic Starlite Drive-In on U. S. 40 one mile east of here was blown down in a tornado that hit this area the night of June 10. The drive-in will be closed at least until the latter part of this month.”