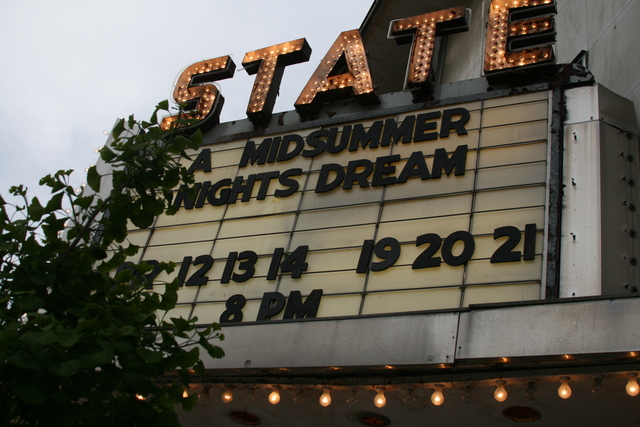 The State Theatre first opened on November 17, 1927, and was the flagship of the Chakeres Amusement Company. Founded in 1911 by Phil Chakeres, the still-functioning circuit grew to an eventual 80 screens in Ohio, and started with the 150-seat Princess Theatre in Springfield. The State Theatre’s architect was Charles E. Dawley, working from a design by John Eberson.

The auditorium might be described as semi-Atmospheric, with castle walls decor but an ornamented ceiling with eight crystal chandeliers.

By 1941, the State Theatre was operated by Warner Bros. Circuit Management Corp. It was never sub-divided and operated until 1990. The State Theatre has since reopened and is now used for live theater as well as screenings of silent movies.

Springfield StageWorks presents THE VAGINA MONOLOGUES by Eve Ensler at the State Theatre.

This production is directed by Liz Dillard and is being presented in association with Project Woman of Springfield and VDAY, the global movement to end violence against women and girls that raises funds and awareness through benefit productions of Playwright/Founder Eve Enslerâ€™s award winning play.

Some stats for the State Theatre/Cinema:
Final movie shown as a first run theatre in August, 1990 was “Darkman” starring Liam Neeson. That same month the State was “Closed For Remodeling” and reopened in early September, 1990 with a new policy-that they would show only second-run movies for $1.50 always. Not sure what the first movie shown under the new policy was. Some movies that were shown during this time included: “Problem Child”, “Narrow Margin”, “Taking Care of Business”, and “Pretty Woman”. The final movie shown at the State was “Jacob’s Ladder” starring Tim Robbins, which closed down the State following its 9:45 PM showing on December 3, 1990.

Also to note: Yes, in fact the Chakeres Theatres home office WAS in the balcony until the State closed down. It’s now located inside the Lobby Shoppes about two miles away from the State. Following its closure, the State was occupied by “Arms of Love Bingo” for many years. It then sat vacant and was briefly a Mexican-themed nightclub in the Summer of 2008 when a fatal shooting took place in the basement, after which the nightclub shut down. Sometime in 2009 the building was taken over by Springfield Stage Works, which runs productions inside the building from time to time.

alans613 – The State never had a balcony. It still has the original long, narrow projection booth with the original projectors and the old levers and pulls that used to control the lights.

The Mexican-themed club lasted only a few weeks in 2008. Before and after that unfortunate event, we had several film screenings, and Springfield StageWorks has been doing shows there since 2005. Now our entire theatre season takes place there.

Our production of The Taming of the Shrew opens this weekend:

Here is my Flickr set of some State Theatre pictures.
More coming soon…

An original film and play about Edgar Allan Poe in March.

Here is the new Facebook page for the State Theatre, with new and up-to-date pictures:

I am quite thrilled to read more about the history of the State Theatre and see the photos of the inside of it. That is because I believe that my father, Harry Limes, helped build it! He was a lather who lived in the Lorain area in 1927 (he was born in 1904) and in my notes of his discussions with me about his lathing work, I have these statements:

“And, he had a big job in Springfield, Ohio, and he offered me $2.00 an hour over the scale if I’d go over there and help him do this big theatre. It was round domed ceiling, it was quite fancy, and I learned a lot. I worked all through this theatre. This was all done during 1927.”

He also worked on the Palace Theatre in Lorain, Ohio, which also has a large chandelier in the center of the theatre’s ceiling with a beautiful round plaster motif surrounding it. So, I am thrilled to learn the name of the theatre!