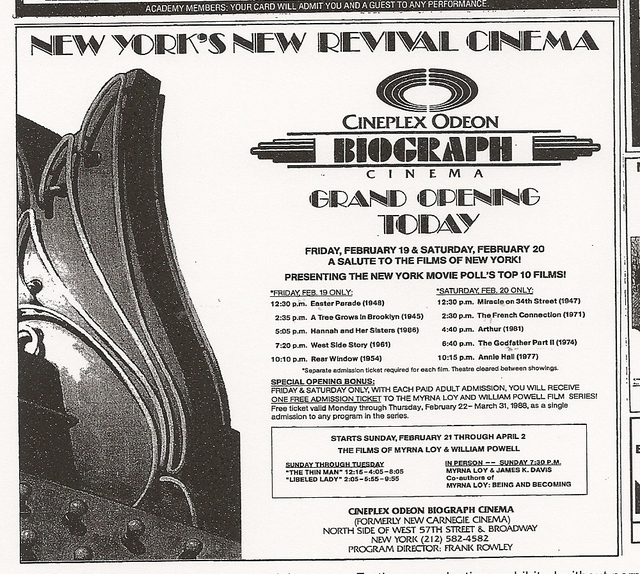 Located on W. 57th Street near Broadway, this theatre was built as a single screen art house in 1964, with seating on the main floor and balcony, it opened as the Lincoln Art Theatre. It had various names and programming policies at various times, including the Biograph Cinema and the Bombay Cinema. It ceased operation as a theatre on July 10, 1997, then having 556 seats.

New Carnegie needs to be added as an aka name and the map link now goes to Queens.

The opening ad as the Lincoln Art;

The intro needs adjusting. This theatre opened in 1964.

“The Graduate” opened here fifty years ago today. The film went on to play for nearly a year. (Anyone know of a film that played here for a longer period of time?) And here’s a retrospective article to commemorate the film’s golden anniversary.

“THE LION IN WINTER” played here for over a year.

Awww, I loved this place when it was the Biograph, and I never realized it had only just started as such when I first moved to the city. I was 16 ½ and my previous job back home in Florida had been working at a video store. They would never let us check out new releases, so I had decided to educate myself on classic film after seeing A Place in the Sun one night on the late, late show. So when I came to NYC shortly after, I was thrilled to find a place that showed these films.

I had started hanging out with some of the club kids of the late 80s through a friend of mine. They had little use for me, but I became friendly with one of the DJs and he shared my love of old movies so we’d often go together to see double features. Saw Who’s Afraid of Virginia Woolf, Alice Adams, Carrie (w/ Jennifer Jones), Adam’s Rib, and my beloved Monty Clift in I Confess and my first of several times seeing A Place in the Sun on the big screen. Once I hit NYU, I stopped going, as I didn’t have as much time and I lived right near Theater 80 (and Kim’s Video, so I’d rent instead), but it was such a treat to get to spend those months seeing classic films on the big screen.