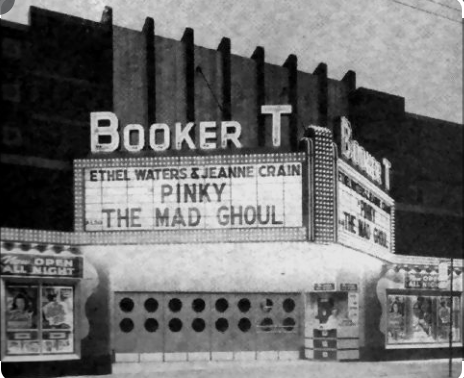 The Booker T. Theatre launched September 30, 1949 in Detroit with first-run films aimed at an urban audience. The post-war venue was a large 1,400-seat Streamline Modern style movie house. By 1954 it was an African-American movie theatre operated by Korman Theatres. The theatre experimented with live “Rock ‘n’ Roll Cavalcades” with R&B groups beginning in January of 1956 with its first show starring The Orioles and future Rock and Roll Hall of Fame act, The Flamingos. Willie Tyler & Lester appeared on the stage in one of the act’s earliest performances.

The Booker T. Theatre’s last screenings were on January 8, 1961 with a double feature of Robert Preston in “Dark at the Top of the Stairs” and Curt Jurgens in “I Aim at the Stars”. A gas explosion in the early morning caved in the roof, blew out the doors, and destroyed the theatre. It was later razed.