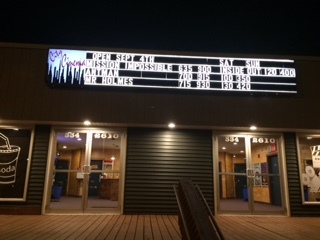 Dating back to 1980 the theatre had a number of owners. It was closed by the landlord after declining business and disrepair in 2014.

The Waterfront Plaza Theatre was upgraded and the theatre was renovated under the supervision and expense of the new owners, Karen Robinson and Erik Larson. Karen had actually worked at the theatre when it was Merrill’s Cinema. It reopened on September 4, 2015.

The theatre is available for special showings and, due to the proximity of the Canadian border, often draws clients from Quebec City.