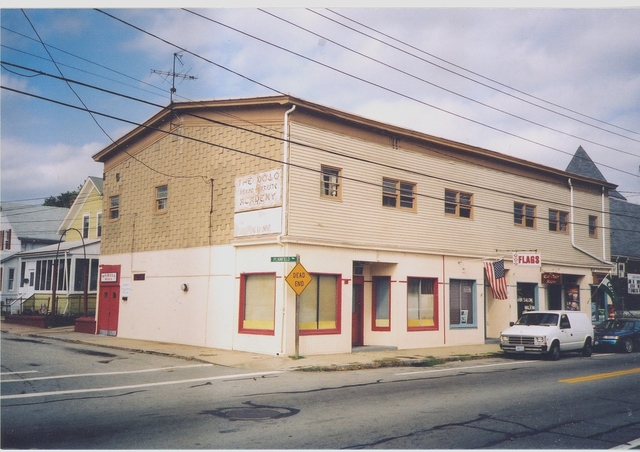 The Myrtle Theatre was located on the second floor of a building in the Thornton section of Johnston and began operation in 1919. The theatre lasted until the early-1940’s, and for a time it was in competition with the Johnston Theatre up Plainfield Street at Atwood Avenue. The building still exists, but the former theatre portion is now the home of a dance studio. The building is still referred to as “Myrtle Hall”.

The place was run by Mr. Mario Votolato of Johnston, RI. It is/was located in the Thornton section of Johnston, which also includes a part of Cranston, on the other side of Plainfield Street which forms the boundary between Johnston and Cranston. He owned the Myrtle Hall block. In the Myrtle Theatre he ran films from the silent era (he mentioned “The Birth of a Nation”…possibly in revival) to the WWII era.

The Myrtle Theatre opened in 1919. Mario was big on kiddie matinÃ©es and movie “clubs” such as the Popeye Club and used this kind of showmanship to promote his programs and provide fun for area kids. The theatre hall was also used for weddings, banquets, showers and similar events. The place was truly a community “Cinema Paradiso.” Although I never saw the interior of the Myrtle when it was a theatre, since it closed when I was an infant, I went to various activities there over the years, including a parish play to see my sister who was in it and to go to a halloween canteen dance in the 1950s. The theatre seeating must have been movable to accomodate these varying functiions.

After the Myrtle closed as a theatre in the early 1940s, Mr. Votolato ran the nearby Johnston Theatre for many years. (That other place was where I got my childhood pre-TV movie education.) The Sunday matinÃ©e there would be the Roy Rogers Club. But in his last years of retirement he could often be seen in or around the flag store on the street level of his Myrtle Building. An amiable man blessed with a good memory, he used to show me memorabilia from the old Myrtle Theatre and the now-demolished Johnston Theatre, which he also ran for many years. He had numerous stories about area cinemas he had had some part in over the decades, such as the Rainbo on Dyer Avenue in Cranston. He had photos, posters, window-cards…some of which he gave me. He also sold me, in the 1980s, an old 35mm projector lens and aperture plate from the Myrtle that I used at the Cable Car Cinema in Providence to shown Academy-ratio films for my Italian Film Society of R.I. screenings since the Cable Car did not have the appropriate lenses and plates to show older films…and still doesn’t. In my teen years the Myrtle Theatre was known as the Myrtle Canteen, and was host to weekend teen dances accompanied by early rock records on 45 R.P.M. discs. The cinema/hall had a flat floor suitable for such events as well as a stage for amateur theatricals. The old St. Rocco’s Church a block away on Clemence Street in Cranston sometimes used it for Christmas plays and such.
Photo 1: The Popeye Club in 1939
Photo 2: The Myrtle in the 1930s or so.
Photo 3: The Myrtle Block recently Note flag shop.
Photo 4: Door of Myrtle Hall

The Myrtle Theatre is listed in the Film Daily Yearbook,1943 edition as being in Thornton, not Johnston. It has a seating capacity given as 200.

Ken, Thornton is IN Johnston. It’s a village center that straddles Johnston and Cranston. I’ve lived here all my life.

Here is a flyer-ad for the Myrtle from 1940. The address “1361 Plainfield Street” was to help people find the building. The actual entrance was on Myrtle Avenue. Thornton is a village in Johnston.

Item in Boxoffice magazine, June 22, 1935, regarding transfer of ownewrship.

“Myrtle, Thornton, from A. Votolato to Francis Renzi.”

SCHOOL CHILDREN ARE GUESTS OF VOTOLATO
All the school children of both Johnston and Cranston grammar schools of Thornton, Hughesdale, and Simmonsville were the guests of the management of Myrtle Hall this afternoon. Following his usual custom, Vincent Votolato, manager of Myrtle Hall, gives a free get-together performance to the school children every year just before the summer vacation. The children saw Will Rogers, the popular droll movie star, in “Boys Will Be Boys,” together with other moving picture reels. The performance began at 4 o'clock.

Are you anxious to hear what was playing at the Myrtle Theatre (Myrtle Hall) in April 1926? Well here you have it:
AD
The theatre was offering Sunday movies for the first time since the RI blue law banning Sunday films had been lifted a few days before.