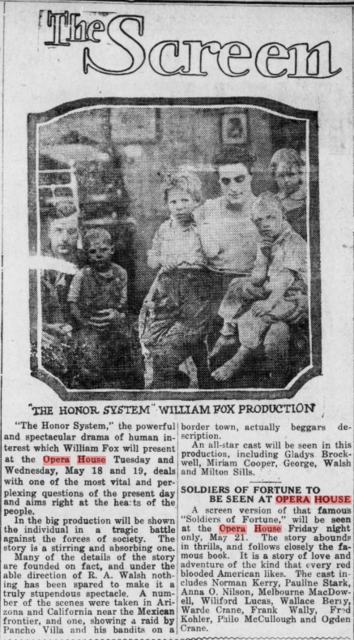 As far as I’ve been able to determine, the only opera house in Americus was the one that opened on January 27, 1882 as Glover’s Opera House. Cahn guides list it as an 800-seat, second floor theater with a stage 27 feet from footlights to back wall and 56 feet between side walls. Though the theater upstairs has long been dark, the Opera House building is still standing at 111 W. Forsyth Street, its ground floor currently occupied by a medical services lab providing ultrasound.

The Opera House began showing movies fairly early, but does not appear to have remained a movie theater consistently. It was not listed in the 1914-1915 American Motion Picture Directory, unless it was operating under one of the two theater names listed in that publication, the Alcazar and the Grand. But as early as 1907 it was operating as a movie house, as noted in this item from The Moving Picture World in November that year:

“Hub and Comedy Theater Company, of New York, have taken over Glover’s Opera House, Americus, Ga., together with the bookings for the season of 1907-8. Incidentally it may be stated that for the last six weeks the Hub and Comedy Theater Company have been putting on a high-class moving picture show at this amusement house on dark or closed nights. So market has been the success attending this venture that the Glover management made a proposition to the Hub and Comedy Company involving exclusive control of the house, under the management of H. K. Lucas. After some modifications, their offer was accepted. As an instance of the up-to-dateness of the New York concern, the full election news was bulletined at both afternoon and evening performances.”

References to the Opera House in the later 1900s and early 1910s were to live performances, especially vaudeville shows. But by the late 1910s Americus had more modern picture theaters, augmented in the early 1920s by the Rylander, and the old Opera House seems not to have been able to compete with them, as I don’t find any more references to it in the trade publications. Around 2016 a book store and restaurant called BitterSweet opened in the building, apparently just on the ground floor, but it closed in 2017. Aside from that, the history of the Opera House since the early 1920s remains dark.