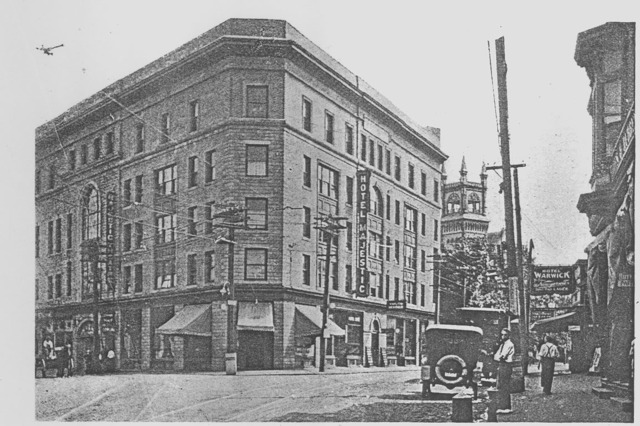 The Majestic Theatre, located in the Arctic neighborhood of West Warwick, was perhaps the major movie theatre of this community at one time. It was opened in 1901, replacing an earlier theatre which was destroyed by fire. It was part of a large commercial building called the Majestic Building and not a free-standing theatre. It closed in the late-1920’s and remained so for many decades until the entire building was demolished in the late-1990’s.

The Majestic Building, with theatre, opened in 1901, to replace a previous building on the same spot that had burned. A 1927 city directory lists four town theatres: Majestic, Gem, Palace, Thornton’s. I have found newspaper ads for all except the Majestic. Also, the Star, in the Natick section of West Warwick, remains a mysterious early-silent-era cinema.

At one time Saint John’s Church, almost next to the Majestic Building, used to run the Odeon Theatre, a kind of French-American dramatic society hall, created in 1909 by one Father Bourgeois of the parish. It had been the old Cadets' Hall. It was located about a block away from the church, on Legion Way. It was to be a showcase of French culture, a small performing arts center as well as a concert and lecture hall. It was modeled after the famous Odeon Theatre and opera house of Paris. I don’t know if the wooden structure was every used for movies. Later it became a furniture store and then years later burned down. I remember driving past it many times.

The Gem and the Majestic shared ads in the WWI era, two columns, one for each theatre. The ads I found for the Majestic went from 1916-1927. I found none for 1928 and 1929. There was an ad for a live entertainment program in 1930. Then pretty much nothing. That gives a rough idea of when the theatre operated, or rather, when it advertised in the newspaper. Here are local newspaper ads for the Gem, Majestic, and Thornton’s on March 14, 1918. The Palace didn’t open until 1921.

I also found ads for stage shows and movies in 1911 & 1912. The span of verifiable activity expands. The theatre had boxes as well as a balcony, according to an ad. When I happened to get into this place a few years ago and it was being used by some local arts group, I did so by walking up a stairway from the Washington Street side to the second floor, where the theatre was. The floor was flat. This all leads me to believe that after the original Majestic closed, perhaps in the 1930s when the ads stopped, perhaps later, the flat floor was added over the first floor orchestra to form a theatre out of what had been the balcony. The original orchestra of the theatre, I theorize, was converted to commercial usage. The entrance to the theatre, I again theorize, had been on the Main Street side, where the “Majestic” sign is evident in photos. At the time I was in the place, there was no balcony. I believe now I was actually in the former balcony, because there was stadium seating rising up above the flat floor. Anyway, all theory.

Birth of the Majestic

Here is a history of the the creation of the Majestic Theatre and Majestic Block after the original building had burned down in 1900. It is from the book Trumpets in Jericho, 1961, by Mathias P. Harpin. The book is a history of “Jericho,” a name given to Arctic and adjacent neighborhoods in Pawtuxet Valley and was before the town of West Warwick was created in 1913 after the division of Warwick into two parts. The name Jericho is no longer in usage, as far as I know. The center of West Warwick is now named Arctic.

From Trumpets in Jericho:

It was the night of Nov. 3, 1900 —– a night that Jericho would never forget. A fire started in the show shine parlor of Joseph Archambault’s block on Jericho Square. It waws the middle of the night. By the time it was discovered the fire had made such gains that even the Warwick and Coventry fire department could not halt the mounting flame.

By dawn Archambault’s block was reduced to ashes. A virtual miracle had saved all of Jericho from destruction as the wind fanned the flames and flung the sparks over the entire business district. Archambault estimated his loss at $17,000. All western Rhode Island wondered what he would do. Would he sell the land or rebuild? Archambault soon answered the question.

For a long time there had been talk of setting of all the valley of the Pawtuxet into a city with Jericho as the municipal center. Many of the merchants felt convinced that this step was inevitable, including Joseph Archambault. One morning as Archambault directed the removal of the remains of his block, one of the merchants asked him what his plans were for the future.

“I’m gonna build the biggest building in western Rhode Island, ” Archambault said. “One that fire will never again destroy. It’s gonna be a skyscraper.” (…) He began construction of a building that was all brick and concrete. He called it the Majestic Hotel. It was seventy-five feet in height and five stories high. In the heart of the building he built a movie theatre. [Note: If it opened in 1901, it must have been used for stage productions, with movies coming at the end of the decade.] All around it were rooms. There was a bowling alley in the basement and a bar and drug store on the street floor. (…)

Archambault leased the theater to Coit and Drew Carson, owners of a livery stable in Coventry. Later these two men opened the Gem Theater in the St. Onge block. Among the first movies shown were the classics “Ten Nights in a Barroom” and “Uncle Tom’s Cabin.” [Around 1911 or so?]

Joseph Archambault died as Jericho became a town. His death occurred in Warwick June 30, 1913. His age was 55; his occupation, foreman. Mrs. Archambault retained title to the Majestic until July 15, 1920 when she sold to Helen R. Duckworth who on Nov. 12, 1921 sold to the Carson brothers, according to town records.

The deed to Helen R. Duckworth stipulated the following: “together with all personal property in the Majestic Theater consisting of drop curtain, asbestos curtains, chairs, pictures, picture machine, picture screens, piano, scenery and electric fixtures…curtains and awnings in the drug store on said premises.” (…)

MAJESTIC BLOCK (1901): Dominating Arctic Square from its prominent site within the “V” formed by Washington and Main Streets, the Majestic Block is a large, 5-story, brick and concrete block, triangular-plan structure. The first bulding on this site, erected in the late 19th Century and known as Joseph Archambault’s Block, burned on November 3, 1900. Its replacement, built by Archambault and called the Majestic Hotel, contained a movie theatre in the heart of the building, with rooms on the exterior walls, a bowling aley in the basement, and a bar and drug store at street level. The largest commercial building in Arctic and the commercial and urban focus of this small central business district for many years, the Majestic Block was renovated in the mid-1980s. […and subsequently torn down.]

A NEWSPAPER AD for Arctic area theatres from September 6, 1925.

The Three Stooges performed here during the vaudeville area which would have been during 1921-1934 for them. At the time they were working with Ted Healy and the act was called “Ted Healy and his Stooges”. Healy was the star and was the most successful vaudeville performer in the country making $9000 a week in the 20s.(yes in the 20s) You can hear a radio interview with Moe Howard talking about when they performed at all the Majestic Theaters in the country on the DVD Stooges Men Behind the Mayhem

Hello all! I am from West Warwick and I am a historian! I am starting to compile a ton of interesting information on all the old West Warwick, theatres! You can e-mail me at . I’d love to help you out. I have many old interesting photographs. Brian

The history of the Majestic Building!

On Sept. 3, 1895, a deed to lot 22 originally belonged to A. K. Barns, A. F. Angel & Michael English, surveyed in 1872 was transferred to Mr. Amedee Archambault, the buyer, from Mrs. Michael English, the seller. On that lot stood a building that once housed the John B. Lemoine Providence Clothing Store. That very day Amedee transferred the title to his twin brother, Joseph, a liquor salesman & also brother of J. B. Archambault. Joseph remolded the building & on Feb 4, 1986, placed the property in the name of his wife, Virginia. On the street level of the building there was A. J. Vines Bar (I HAVE A PHOTO OF IT) as well as the Arctic Pool Room and bowling alleys. (I HAVE A PHOTO OF THAT ALSO).

On November 3, 1909 a fire started in the shoe shining parlor of the block. (I HAVE A PHOTO OF THAT ALSO). The next day the Entire Archambault building was destroyed at a loss of $ 17,000 dollars. Shortly afterwards Joseph Archambault began construction of a New Majestic Hotel. It was 75 feet in height and 5 stories tall. It was made of brick and was built to last a long time. In the heart of it was a movie theatre (I HAVE A PHOTO OF THAT ALSO). All around it were rooms to rent, there was a bowling alley in the basement & a bar & drug store on the street level.

Mr. Archambault leased the theatre to Coit & Drew Carson, who also operated the GEM THEATRE on the second floor of the St. Onge Store. When Joseph Archambault died on June 30, 1913, his wife sold the hotel to Helen Duckworth on July 15, 1920. She in turn, sold it on Nov. 12, 1921 to the Carson brothers subject to mortgages of record aggregating the amount of $ 52,000 dollars. After that it turned over to many hands.

During the 1990’s Mrs. Lumbardy purchased the building and she refurbished the beautiful large theatre, but there were not to many people coming to see the live shows. She put a lot of money into the theatre, but West Warwick was on it downside and she lost the building. She worked very hard, but….!

The Majestic Building was torn down in 1999. (I HAVE OPICTURES OF THAT ALSO). Now the area is now a park with a nice gazebo.

HAVE A WONDERFUL DAY!