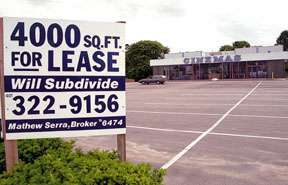 Originally built as a single screen Jerry Lewis Cinema in the late-1960’s or shortly thereafter, the theatre became an independent house and was afterwards split up into four theatres.

It shut down a around 2000, probably because of competition from the nearby Stonington multiplex. It is currently used for retail.

The former Westerly Cinemas 4 are now a Pets Plus and a Blockbuster. The building, which was white as a cinema, has been repainted a horrific shade of pink. It was run by the Hoyts chain before it closed. Built in the 1970’s, it was previously run by Interstate Theatres. Hoyts closed it in winter 2000 after they opened the Stonington Cinemas nearby. A photo of it as a cinema can be seen at View link

I don’t know if I went to this theatre more than once, but I noted seeing A Few Good Men here on January 18, 1993.

I thought when JERRY LEWIS opens his “CINEMAS” they were twins,the above statment says one screen.

It was a Twin Cinema until July of 1984. The owners took screen 1 & split it in half making two smaller theaters (roughly 150 seating capacity per theater) then was reopened in late summer of ‘84. The Cinema then went under the name Westerly Cinemas 1, 2, & 3.

Surprized they didn’t split theatre 3 and make a quad,like they did at my theatres COLUMBIA 1 and 2 Theatres.

Mike: this was a quad.

Thanks Roger,sure they ruined the old twin like so many others.