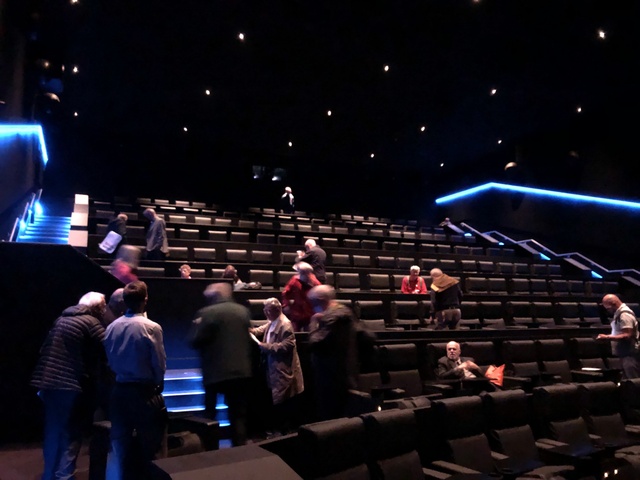 Located on the south side of Leicester Square, and built on the site of the much loved Odeon West End (which has its own page on Cinema Treasures). The Odeon Luxe London West End is in the basement of the Londoner Hotel. It was opened on 9th September 2021 with a special screening of “Respect”, starring Jennifer Hudson. The opening programme the following day was “Shan-Chi and the Legend of the Ten Rings” in Screen 1 and “Malignant” starring Annabelle Wallace. in Screen 2.

I had the chance to look at these this week, and I have to admit I was pleasantly surprised by the development. The auditoria (whilst black and plain) are comfortable and spacious with no oppressive basement feel. The entrance is dramatic and the foyer (designed with a much higher number of patrons in mind) is elegant and generous. A few photos (October 2021):-

Whilst some of the film was shot on IMAX 70mm film cameras, and some scenes are presented in full height 1.43:1 in a suitably equipped venue (i.e. IMAX dual laser projection with the necessary screen height), these total duration of these scenes is less than 30 minutes.

A friend of mine timed them thusly:

Nevertheless, I think you’d be missing out if viewing a “scope” only presentation.

(Alas, the only IMAX venue in this country offering a 1.43:1 presentation for this film is in Manchester, almost 250 miles [by road per Google Maps directions] North of where I live; not being willing to travel that distance just for this film, the only IMAX option was 1.9:1.)

The film itself is probably not a “classic” but it certainly ticks all the boxes for an enjoyable Bond outing; epic scale, wall-to-wall action and plot turns, excellent cinematography and locations. (No ghastly “cinéma vérité”-style “shakycam!”)

There was only the odd bit of grain in the IMAX presentation, so must have gone through digital noise reduction processing. The image quality is a “best of both worlds” hybrid, with a softer/diffused filmic look, whilst the (mostly excellent and consistent) colour grading makes ample use of the options available today with saturated greens and cyans at times; overall typically heavily stylised in a glamourous way.

Sound, too, was good–albeit not quite as loud as expected. (Some of the trailers before the main feature, on the other hand, were ear-splitting!) There was some clear use of the overhead channels, most noticeably dialogue being panned to them when characters were using earpieces, which I found slightly distracting.

As is by now widely known, there is a contemporary political issue around the future of the franchise, and you may or may not find this affects your enjoyment… and I think that’s all I’ll say about that here…

Getting back to the point of this page, which is about a cinema that boasts a Dolby Cinema system in its main auditorium… The “filmic” look is also benefitted by IMAX’s projection, which (even the single laser projection system) seems to achieve a smoother image than Dolby Cinema; therefore I recommend viewing it in an IMAX with Laser equipped venue.

It’s great fun and it, surprisingly, does live up to the hype–so I’d say go see it in the best cinema you can.

I only saw the cinema, not the film on this occasion - but will be seeing it at my ‘local’ on Tuesday.

Ian: Thank you for posting links to those photos. It looks like Screen 2, happily, has a masked screen (c.f. the floating screen in Screen 1;) do you know if moveable masking is in use?

It also appears to be exceptionally bland–not even linear lighting to add a dash of colour to the sidewalls?

CF100: I cannot be entirely sure, but I think moveable masking is in place, although like the Odeon Luxe LS tabs whether it is used or not is an unknown fact.

I was very generously allowed in between screenings whilst cleaning was in progress, but looking at the walls in the photos I cannot discern any lighting strips which may add a colour in screen 2 - there are blue strips in the aisles. The shape of the auditorium may be a factor - the lighting strips may be more effective in a longer, more oblong theatre?

Moviebuff82: I, too, would recommend the Bond movie. As you would expect, the cinematography is superb, right from the start as the opening credits merge into a forest. It is witty, the chases exciting, and to say much more would give away too much! Do find a big screen to see it though.

SethLewis: Odeon are/were the leaseholder for both the West End and “Covent Garden” locations, with redevelopment of both sites proposed/completed such that cinemas are spatially not the primary use, that instead being hotel accommodation/associated facilities.

The current state of the Odeon Covent Garden appears to be that the 2017 planning application was rejected, and on 10/03/21 was dismissed on appeal. I could not find any further applications on Camden Council’s planning database.

That being said, from the 2017 application, unlike the OWE, for any redevelopment of the “Covent Garden” site incorporating a cinema, another operator would need to be found. Clearly, any such redevelopment is years away from completion…

Edgar Wright has posted a video of the entrance corridor to the Dolby Cinema auditorium.

AFAIK this is currently the only Dolby Cinema in the UK to include the “AVP corridor” feature.