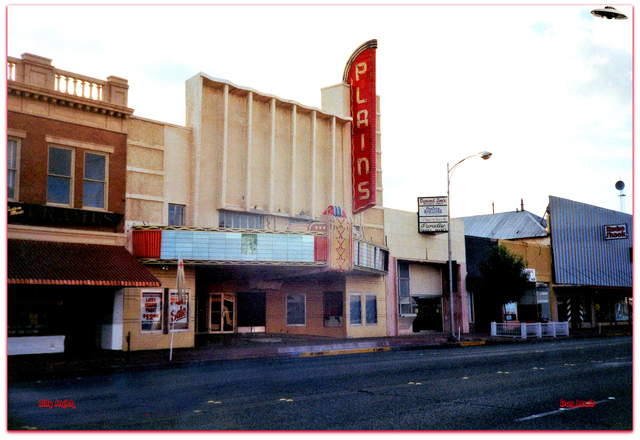 The Plains Theatre in Roswell was the main movie house in town. It opened in 1946, and I went there with my friends from 1948 until 1958 when I moved away. Seating was provided for 1,000 all on a single floor, and there was a small 30 seat balcony, located next to the projection booth, which was for the exclusive use of Negro patrons.

It was state of the art at the time with a CinemaScope screen. Had many enjoyable times there both as a young child and as a teenager. It was closed in the 1970’s, and has been turned into the Alien Headquarters (today known as the UFO Museum), dealing with all reports of UFO’s around the world.

In the summer of 1963 my family and I visited my grandmother who lived in Roswell. My brother and I went to see “the Thrill of it All” with Doris Day and James Garner. I’m not sure if the theatre was the Yucca or the Plains. There was a small balcony and instead of using film date strips for the trailer (“Bye Bye Birdie”) there were light boxes under the screen with backlit titles that flashed on and off.
I asked to visit the booth but the manager wouldn’t let me ( I was 15). I peeked in the portholes and I think they had Peerless Magnarcs on E7’s. I also think there were magnetic penthouses. I could be wrong about all of this. It was a few years ago.

Here is another view of the museum:
http://tinyurl.com/qeyzab

I remember repairing the Plains Theater sign many times. My grandfather built quite a few of Theater Enterprises signs from 1947 to around 1955. He owned Tesco Neon in Roswell. Theater Enterprises was a Dallas Texas based theater company. If I remember correctly, they had an operating company called Frontier Theaters that took care of the West Texas and New Mexico part of their business. Of those that Tesco neon built were the Plains and Yucca in Roswell. The Yucca was demolished. The Cavern in Calsbad, NM which is closed but still standing. The Lea in Lovington, NM which is still in operation. The Frontier in Hobbs, NM which is gone now, and the State Theater in Pecos, Texas. All of these signs were built utilizing porcelan enamel panels. The attraction panel section was made out of opal glass behind an Bevelite Adler frame to support clip on letter fonts. These signs are all around 60 years old and the ones that are still standing look as good as the day they were manufactured because of the porcelan enameling process. I am sure there were others, but these I remember having to
work on. Would love to have a photo of the Yucca.

I worked at the Plains theater (worked the concession, took tickets, ushered and changed the marquis) in part of 1952 and 1953. The Plains theater was managed by Mike Allred. Boyd Scott was general manager over all of the theaters in Roswell.
I started out working for Buddy at the Twilight drive in theater, located southeast of town. His last name might have been Hale.
I met my wife Peggy at The Plains where she worked p/t while attending business college. She worked with a very nice girl (in the ticket booth) by the name of Ruby.
I was a S/Sgt. at Walker AFB and worked p/t for the extra money and to stay busy
Boyd Scott attended our wedding. He had been good enough to overlook the rule that you could not date and work at the same theater.
Upon discharge, we moved to Albuq for ten years and on to Illinois where we currently live. We have not been to Roswell for ten years.
All of the people associated with the Plains were fine people and I respected them very much. (Thank you Ken for the photo of the Plains theater. It is just like I remember it)..
The only movie I really remember (because it played over and over and over) was Ichabod Crane and Mr. Toad.
If anyone knows anything about the above people, please email me

Does anyone know when the Plains theater showed it’s last film, excluding the Spanish films? Thanks.

Photos of the Plains and three other Corgan-designed theaters appeared in Boxoffice of December 6, 1947. The other houses featured in the article are the Agnew and May theatres in Oklahoma City, and the Boomer, Norman, Oklahoma.

From 1957 a photo postcard view of Main Street along with the Plains Theatre in Roswell.

The L.A. Times has a travel article about the UFO Museum, with a photo

Just saw a piece on Mysteries at the Museum on the Travel Channel which mentioned this venue and showed some of the exhibits.