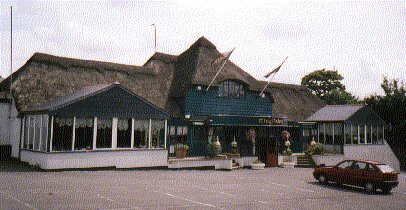 Located in the village of Wall Heath, Staffordshire, to the north of Kingswinford in the ‘Black Country’ area of the West Midlands. Originally built in 1934 as a Lido, built in a mock-Tudor style with a thatched roof, the Kingfisher became the only Olympic sized swimming pool outside of London.

After closing in the 1950’s, the Kingfisher Club played host to live performances during the late-1960’s and into the 1970’s. Names including The Beatles, Jimi Hendrix, The Supremes, and Gerry and Pacemakers, headlined the venue. After the Kingfisher Club closed, the restaurant chain Hickory’s Smokehouse took over the venue in 2015. However in the Summer of 2016 a fire broke out, setting alight the original thatched roof and wooden ornate features. In 2017 the rebuild of the roof and repair of the stained glass windows started. In 2018, Hickory’s opened a cinema room, dedicated to children and the showing of children’s films.