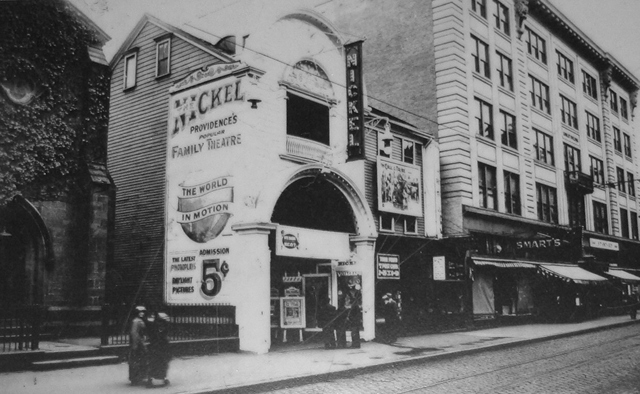 The New Park Theatre was opened by November 1901. In 1906 it was renamed Nickel Theatre. By March 1908 the Nickel Theatre was operated by C. Westgate and playing continuous performances in its 1,000 seat auditorium. It was demolished in 1918 and replaced by what was to be the E.F. Albee Theatre (later RKO Albee Theatre) which opened in April 1919.

The Nickel was the last of several names for this “nickelodeon” before it was demolished. Its sequence of names was Dime (Providence Dime Museum) – Keith’s Gaiety – Lothrop’s – Olympic – Park – Nickel. The lobbies of the Albee Theatre, when that theatre was built, occupied the approximate space of the Nickel. I found a map of downtown Providence theatres (1871-1950) and their name changes in the files of the Rhode Island Historical Society.

Here is a nice old postcard of the Nickel along with Grace Church and the to-and-fro of Westminster Street.

From “The Board of Trade Journal” of April, 1915:
“Too many theatres? Nothing of the sort! The Emery is turning away people at every performance. The "Hip,” with its very large auditorium, is packed to the doors. The Bijou and Nickel can’t accomodate those seeking to see “the movies,” neither can the Gaiety, the Scenic, the Union or the Casino. Out in OLneyville Spitz & Nathanson’s new theatre has all it can attend to."

According to Roger Brett in Temples of Illusion, the first regular movie operation in Providence was the Nickel Theatre, beginning on April 18, 1906, the day of the San Francisco earthquake, which distracted from the cinema history being made locally. Before that only a few helter-skelter presentations of the Vitascope and LumiÃ¨re CinÃ©matographe as a novelty had taken place, such as a notable presentation of The Great Train Robbery at Music Hall, another Westminster Street theatre around 1905 as well as in Olneyville. The Nickel’s opening film program that day was four short movies: The Dream of the Rarebit Fiend, The Country Straw Ride, The Kentucky Feud, The Devil’s Dice. Nine months later the Scenic Temple (later “Rialto”) on Mathewson Street became the second theatre in the city to show movies regularly.

In his book Temples of Illusion Roger Brett gives the short history of the doomed theatre across the street from the Nickel called the Lyric:

“Next was the Lyric Theater at 303 Westminster Street, opening on March 10, 1907. It was a converted store and one of the few movie house failures, closing about seven weeks later. The Lyric’s proprietors, whose identity has been mercifully lost in the mists of time, right from the start conducted a smear-filled advertising campaign directed at Abe Spitz’s Nickel across the street. Abe, who was no neophyte at this game, responded in kind. (When his Empire had a season of summer vaudeville following the closing of Keith’s headline winter season, Spitz presumptuously bannerlined his newspaper ads, ‘After the Minnow Comes the Whale.’) Since the Lyric was obviously run by green-horns, it is not at all unlikely that the veteran showman Spitz prevailed upon a few distributors then in business to forget about delivering the Lyric’s films. Whatever the reason, the store-front operation soon folded; and in 1907 a movie house didn’t fold for no reason at all.”

From the Old Stone Bank History of R.I., Vol. 4, on the very first presentation of a film in Rhode Island:

“If Mr. [Abe] Spitz’s memory serves him right, and according to the recollections of Mr. Frank Page, life-long associate of Spitz, the first motion picture seen in Rhode Island was exhibited in his Olympic [later named Nickel] Theatre on Westminster Street, probably during the year 1896.

“The title of this first picture was ‘Fireman, Fireman, Save My Child,’ and both the projection machine and the film were procured from Lubin of Philadelphia, a pioneer in the industry. The machine was nearly nine feet long, and with considerable difficulty was placed in the balcony on a series of jacks. A generator was set up on the stage and connected by cable to the projector in the balcony and a small screen was erected on the stage. Strange as it may seem, our first local movie was a sound picture, in a sense, for as the sequence flickered away, from the peaceful family scene around the fireside to the sudden burst of flames, and from then to the fire-house and the wild scramble of hoses and ladders and finally to the daring rescue, none other than the famed song writer, Joe Howard, who with his partner wife, then billed under the name of Emerson, stood in the darkened wings and sang an appropriate ballad. What they sang is not known, except that, for certain, it was not Joe Howard’s immortal ‘I wonder Who’s Kissing Her Now,’ for at that time Joe had no good reason to say it in the song as he did later, ‘Good Bye, My Lady Love.’ Emerson was still in the act, and still Mrs. Howard, when the two accompanied with song ‘Fireman, Fireman, Save My Child,’ Rhode Island’s first movie in the now long-forgotten Olympic in Providence.

“For many years thereafter, a motion picture remained on the bill of local theatres as a novelty, a chaser, or trailer, and Edward M. Fay, leading showman in these parts, remembers well how the customers at the old Keith Theatre started putting on their coats when the variety program rang down the final curtain on the acrobats or the trained bears, and the house was darkened for one reel of ‘Old Madrid,’ ‘Plantation Capers’ or ‘How Susie Captured the Burglar.’”

Ten years later in 1906 the former Olympic, now called the Nickel, became the first full-time movie theatre in Providence and in Rhode Island.

Here is a vintage postcard image of the Nickel Theatre and Westminster Street, circa 1910 (a guess).

The first three full-time downtown Providence movie theatres were these: Nickel, Scenic Temple, Bijou. There are others that did show films previously but they were sporadic showings, or in the case of the Lyric, short-lived. Movies were the main policy, though the Scenic Temple did include vaudeville acts. This ad from August 1, 1908 makes clear the growing trend: moving pictures are here to stay! They are not a mere innovation.
NICKEL, SCENIC TEMPLE, BIJOU