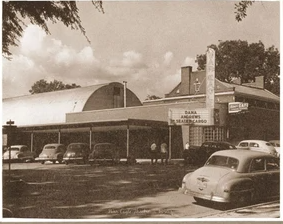 The War Eagle Theatre, downtown Auburn’s second long-running movie house, opened on August 19, 1948 with the Judy Garland-Gene Kelly musical “The Pirate”. Designed by Gadsden based architect Paul W. Hofferbert, the Streamline Modern style structure of brick, tile, and glass brick, with a steel barrel vault roof on the auditorium was situated across the street from the campus of Auburn University, and also housed a popular local café called Athey’s.

After the opening of the Village Theatre in 1969, downtown Auburn supported three movie theatres for over a decade, but the end came rather quickly. The Tiger Theatre closed in April, 1984, and the War Eagle Theatre followed about a year later. The Village Theatre held on until late-1985.

After closing as a movie theatre, the War Eagle Theatre building housed a series of restaurants and live music venues, the first of which was called the Movie Pub, though I haven’t found evidence that it ever actually ran movies. After some additions and alterations to the building, the current occupant is a venue called the Skybar, which features live music and dancing. The auditorium’s Quonset-like steel roof can still be seen from the side street, Wright Avenue, partly obscured by a second-floor addition.

I forgot to include the fact that the War Eagle was a Martin Theatres operation, Auburn’s first chain theater.