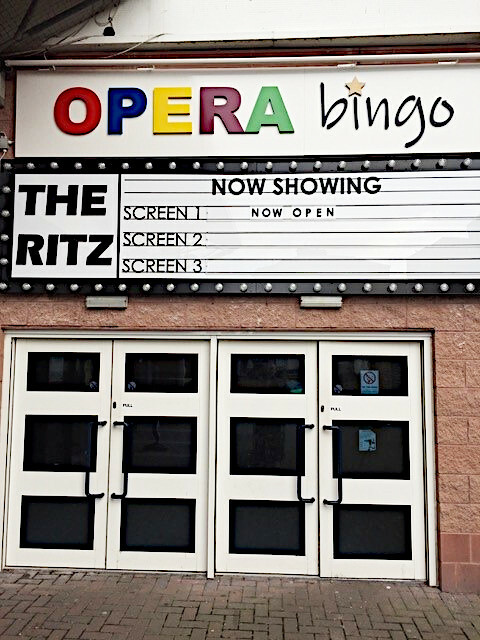 In Workington, Cumbria, this new Ritz Cinema had first been announced in March 2020, when Graves Limited, the owners of John Peel House, proposed the construction, within that building, of a three-screen cinema, complete with a café and bar. The building was at that time home to Opera Bingo, a Wilko store and the Funtastic soft play area.

In October 2020 a formal application was submitted to convert the soft play area into a three screen cinema.

The Graves family are certainly no strangers to the town, having operated the original Ritz from 1938 to 1988 and, more recently, from 2001, the Plaza Cinema, an out-of-town multiplex. That was closed at the onset of the COVID-19 pandemic in March 2020 and, in April 2021, it was announced that, due to a disagreement about the lease, it would not be re-opening. (Both cinemas have their own entries on Cinema Treasures.)

Not to be deterred, Graves decided on this more modest replacement, utilising space the company already owned and not needing to make any substantial alterations to the exterior.

The new Ritz Cinema opened on 30th September 2021, its name a direct nod to its predecessor.

The cinema occupies the top floor, and is accessed by two lifts (or via “wide staircases”, promoted as providing healthy exercise!). Seating capacities are: Screen 1:54, Screen 2:55 and Screen 3:60. The seats have generous leg-room and cup holders, while the auditoriums have wrap-around screens, digital projection and surround sound.

The Ritz Cinema opened just in time for the latest James Bond action thriller, “No Time to Die” starring Daniel Craig. Other opening films were “Respect”, the Aretha Franklin biopic, and the Marvel Studios' action adventure “Shang-Chi and the Legend of the Ten Rings”.