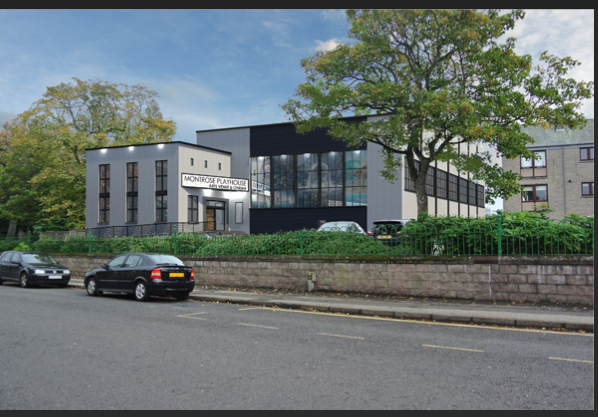 In Montrose, Angus, in late-2012, the swimming pool had become surplus to requirements when Angus Council created a new facility on Marine Avenue. Montrose-born architectural designer David Paton, who is passionate about re-using buildings where possible, went to work in re-imagining the building, taking inspiration from the former Angus Playhouse (the town’s most recent cinema, which had closed way back in 1977 - see separate Cinema Treasures entry) and the Dundee Contemporary Arts Building. A public meeting was subsequently convened, following which the Montrose Playhouse Project was born.

On 1st September 2017 the building was purchased from Angus Council for the princely sum of £1. More than 80 volunteer individuals and businesses gave up their time, materials and, in some cases, their money, to strip the building back to a shell, saving around £250,000 in value and around six months in time.

In March 2019 the project was awarded £2.26m from the Scottish Government’s Regeneration Capital Grant Fund, in a working partnership with Angus Council. A main contractor, Bancon Construction Ltd, was appointed in late-2019, with a view to start works in early-2020, then the COVID-19 pandemic hit!

The site was shut down, with no activity for several months due to the first lockdown. Thankfully, when that was lifted, Bancon were able to fully mobilise on site and start the 13 month programme of works.

These were completed in late-September 2021. Following two special events on Wednesday 6th and Thursday 7th October, the Montrose Playhouse opened to the public on Friday 8th October 2021, the main opening feature being the latest Bond adventure, “No Time to Die” starring Daniel Craig.

Other opening films included children’s favourite “The Addams Family 2”, action adventure “Shang-Chi and the Legend of the Ten Rings” and, in complete contrast, “Eye of the Storm”, a profile of landscape artist James Morrison.

In addition to the three cinema screens, there are two activity rooms, situated in a flexible area which was home to the swimming pool’s plant room. There is also the Reel Café Bar.

Screen 1, with 150 seats, has a small performance space at the front for live performances and a range of seating, including sofas, love seats, cinema seats, wheelchair spaces and front rows with footstools. Screen 2, also with 150 seats, has a mixture of regular cinema seating, sofas, love seats and wheelchair accessible spaces. Screen 3 is a smaller, more opulent, space with around 100 larger cinema seats and sofas as well as wheelchair spaces. There are also side tables, so this auditorium can be used for special events, premieres and private hires.

(I would like to acknowledge the Montrose Playhouse’s website, from which this summary narrative has been sourced. This extremely informative website contains much more information, along with many photographs, about this splendid project, which has brought the ‘big screen’ back to the town after a long 44 years.)