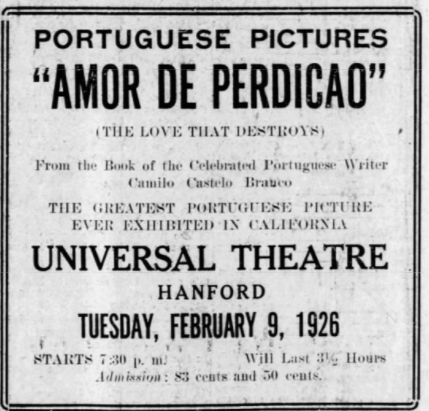 This theatre showed films during the silent era, opening on March 28, 1914. Advertisement found from 1926. A collectables store now operates from a building at this address.

If the Universal was being advertised in 1926, there might have been more than one movie house to use that name in Hanford. This item is from the November 8, 1924 issue of Moving Picture World:

“Lewis & Byrd, who recently secured the lease on the Universal Theatre, Hanford, Cal., have closed and dismantled the house, formerly operated by a Japanese exhibitor.”

An ad for the Universal Theatre in the October 14, 1915 issue of The Hanford Morning Journal said that the house was presenting “…Its Seventh Great Broadway Universal Picture….” which suggests that the theater might have opened fairly recently. No theaters are listed at Hanford in the 1914-1915 American Motion Picture Directory, though there’s a god chance that was merely an oversight. It was already a good-sized town, and the County Seat of Kings County.

An item in the November 25, 1916 Moving Picture World said that the Universal Theatre in Hanford was being enlarged, and would now have an additional 200 seats.