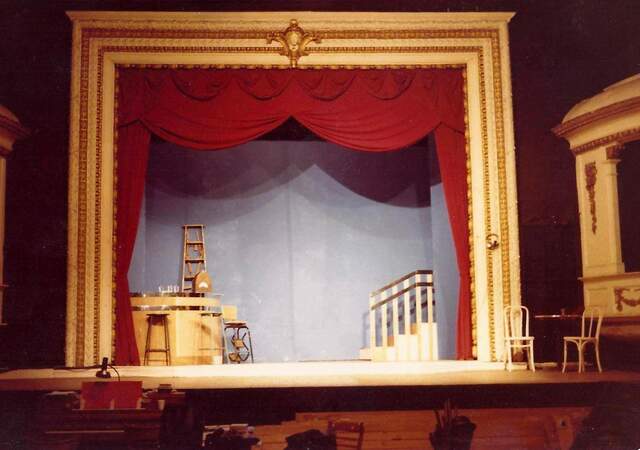 The Red Mill Theatre was a second floor cinema, that operated above a first floor penny arcade, between 1907 and 1924. The Tivoli Theatre opening less than a block away, was a likely reason for its closure, as the smaller cinemas found it difficult to compete for audiences.

Although silent films were the main attraction of the Red Mill Theatre, there was a small stage and dressing rooms for vaudeville performers, who were also, often part of the bill.

During the teen years, the Red Mill Theatre was leased and managed by Dave Stewart, who also ran the Unique Theatre, another nickelodeon on York Boulevard, a few blocks away.

There was also an early nickelodeon, called the Red Mill Theatre on Yonge Street in Toronto, circa 1906, which later was called the Theatorium. Based upon this common name, I thank it was likely that they shared the same owners.

By 1925, according to Hamilton City directories, the former second floor cinema was being used as a union lodge hall.

During the 1940’s, and lasting for almost thirty years, the auditorium was used as a studio for teaching ballroom dancing. As part of this purpose, the small balcony area was removed, and a flat sprung floor was installed.

In 1977, a local theatre producer Bob Gibb, reopened the space as the Red Mill Dinner Theatre. It mainly produced small musical reviews, catered by the Tivoli Restaurant, which operated on the first floor, in the space originally operated by the penny arcade.

By the early-1980’s, the space was renamed the Randolph Rhodes Dinner Theatre, and comedies and farces became what was offered to the theatre going public.

After the dinner theatre closed in 1988, the Tivoli restaurant continued to use the space as a banquet hall. In 1998, the restaurant downstairs, became the Harvest Moon, and the upstairs hall was decorated with Chinese characters.

Despite all of these small changes, the beautiful hundred year old proscenium arch, with its two plaster boxes on either side, survived intact, until quite recently.

Tragically, an axe throwing business leased the second floor of the building in 2019, and the auditorium was gutted to the bare brick walls.

The physical space that the theatre once occupied, survives, but there is now nothing remaining of the building’s rich Edwardian era cinema architecture.

Many of Hamilton’s theatre buildings have been destroyed, over the years, but I will confess that the recent destruction of the interior of the Red Mill Theatre, is a loss that I have grieved the most in recent years.

“The Red Mill” was the name of a popular operetta by Victor Herbert which premiered in 1906. Quite a few theaters were subsequently named for it.

I have add an image of the fire insurance map from February 1911, showing the Red Mill Theatre.

I have since discovered that the Red Mill theatre was operating as late as 1930, at least it is still in the Vernon’s City Directory. The small nickelodeons typically did not advertise their bills in the local newspapers, but I did find ads for this theatre in the Labour News, demonstrating that their audience was working class.

Also some confusion in the name of the manager. Dave Stewart indeed managed the Red Mill Theatre in the 1920s, but he was not the Jack Stewart that managed the Unique Theatre, and ran a sheet music business, called “The Song Shop”, next door to it. It was Jack Stewart that went on to manage the Lyric Theatre on Mary Street, not Dave.

I have no idea if they were related!

I would find it surprising if there were actually 800 seats!

I will be adding the Imperial Theatre and Temple Theatre next, which are also on this list. Both are not yet in the Cinema Treasures database.