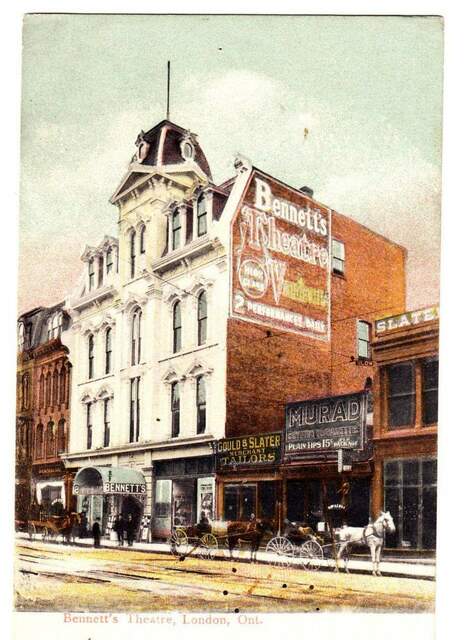 The Mechanics Institute originated as an idealistic enterprise in Great Britain in the late-18th century and found fertile ground in Upper Canada. Its goal was to provide the working man with an inexpensive means of furthering his education.

The London Mechanics Institute Building, at 229-231 Dundas Street, was the third and final building it operated from. It was constructed in 1876 under a design prepared by Thomas Tracy of the London architecture firm of Robinson, Tracy and Fairbairne.

The new building, built in the Second Empire style, contained the necessary classrooms and offices, a library, museum, gymnasium and a well-equipped theatre on the upper floor.

Until about 1920 the building served as the premises for the Conservative Club of London. Its facilities were, as was the case with the Mechanics Institute, open and accessible to all classes of society.

While under the ownership of the Conservative Club the theatre was very popular and accommodated in turn: the London Music Hall, and New Opera House.

By 1905 the theatre was leased by C.W. Bennett, and it was extensively renovated, to become the first of six buildings that belonged to his “big time” vaudeville circuit that presented Keith / Albee acts in Canada, the other theatres being in Hamilton, Ottawa, Montreal, and Quebec City.

By 1910, and in declining health Bennett sold all of his theatrical interests. The building continued to operate controlled by Canadian United Theatres Inc., but was then renamed the Majestic Theatre.

From approximately 1921 onwards it became exclusively a cinema, until it closed circa 1930, and the auditorium converted into an arcade and billiard hall.

Although designated a historic building under the Ontario Heritage Act in 1988, its interior has been redeveloped into office and retail space. Sadly nothing seems to remain of the theatrical auditorium or stage house, the building is at least well maintained.

Astonishingly, the stage of the theatre, became the scene of a real life murder on April 1, 1898.

Jim Tuttle, an impresario who had booked a professional company into the building, was finding it difficult to pay his actors. Tuttle owed lead actor W.D. Emerson and other cast members, including Emerson’s pretty young wife, their salaries for the previous week’s shows.

During a Friday night performance, a fight broke out between Tuttle and Emerson. Unable to win by physical strength, Emerson pulled out a 32-calibre revolver from his pocket. When it discharged accidentally, the unfortunate Tuttle was shot in the face.

At first the crowd milling outside the curtain thought the frantic call for a doctor was just part of the play’s action or an April Fool’s prank.

Unfortunately it was neither. Tuttle was quite dead and Emerson was arrested for the crime. Londoners collected donations for Emerson’s defence and when the verdict of “not guilty” was announced, local residents celebrated with the happy actor, his actress-wife and their young daughter.