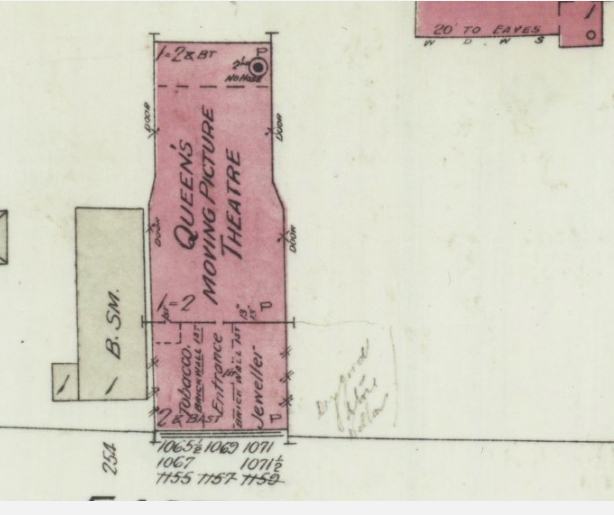 The Queen’s Theatre opened in 1914, and was directly across the street from the former Maple Park summer amusement grounds, and a block away from the race track operated by the Hamilton Jockey Club.

A live outdoor venue called the Sherman Park Theatre operated successfully for several summer seasons, between 1904 and 1911 when the grounds were sold, to be redeveloped into blocks of houses. Clearly there was a large audience to be found in the working class neighborhoods adjacent to Hamilton’s steel mills.

The building was an early cinema built by Frederick Guest, whose first project was the Empire Theatre, and who later built the the Delta Theatre and Strand Theatre.

After Fred Guest retired to Vancouver, BC, in 1930, his final project was the Stanley Theatre, on Granville Street, which ironically, is the only one that survives as a theatre.

Despite years of searching, I have never seen a single photograph of the first Queens Theatre.

I have seen the architect’s drawings for the building, in the Ontario Archives, which show it to have been very similar to the Empire Theatre, or the Majestic Theatre in Dundas.

It was a long narrow two story structure with a balcony, a narrow entrance with two small stores on either side.

From looking at the fire insurance map, in 1914 the Queen’s Theatre, and a nearby church, were the only structures on that particular block of Barton Street, just west of Ottawa Street.

At some point in the late-1940’s, or early-1950’s, the second Queen’s Theatre, and a bowling alley were constructed, on the same lot.

A much smaller 300-seat second floor cinema operated until the late-1950’s, and was then subsequently used as a banquet hall.

The bowling alley closed about ten years ago, and the building has been empty ever since.