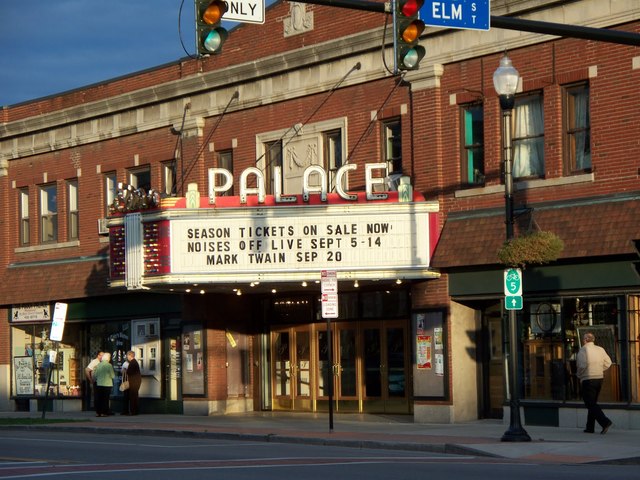 Since I’m a firm believer in giving credit at the top of the marquee, special thanks to Ellen Schratz (board member) and Bob (house manager) for a memory jog of details and supplying supplemental information.

Built in 1925, by Charles Dickinson from plans by a local architect, the Palace Theatre was opened on July 18, 1925 with 1,750 seats. The theatre was redesigned in 1936, and several people confirm the architect behind the make-over or interior renovations was John Eberson. The theatre is not in an Atmospheric style, so this was a departure from his usual style. The Neo-Classical style brick exterior combined with its blend of different interior disciplines culminate to provide an impressive, stately theatre.

Shortly after its opening the theatre was leased to the Schine Circuit Inc. who later purchased the theatre in 1936. After many sucessful years, the Palace Theatre closed its doors in 1969, and stood empty for almost three years. Bought in 1972, by a developer who originally planned to knock down the theatre building, the Palace Theatre survived and re-opened. One explanation was that high demolition costs and the ongoing trend of the departure of retail outlets and offices from downtown areas, caused the developer to re-think the proposed parking lot strategy.

The developer re-opened the Palace Theatre in 1972 under either direct or indirect management of the Dipson Theatres chain. In November 1988, I sat in this impressive theatre along with – yes, several hundred others watching the dreadful “Ernest Saves Christmas”.

The theatre did consistently well with family and Disney films into the mid-1990’s. “The Lion King” (the movie) was its best grossing film of all time. As outlying multiplexes increased and retail left downtown it became harder to draw patrons to the downtown area. In 1999, the Palace Theatre showed its last movie but was again saved from the wrecking ball by Curtain Up Productions who leased the theatre from 1999 through 2003.

In December 2003, the theatre was sold to a non profit group who now run the theatre. The whole complex including retail space, offices and the theatre was purchased for $250,000. Despite it needing a $50,000 roofing job, it proves bargains still exist. On April 27, 2013, the new digital projector was inaugurated with two free screenings of the digitally restored version of “The Sound of Music”.

An update on the theft at the theatre is found above.

Vandals have not deterred activity at this theatre. Check out upcoming films and live performances at:

This link deals with the theatre’s plan to convert to digital projection.

The above newspaper article expands on the Palace’s plight to go digital.

The above link shows the upgrade being made on the marquee.

Saw the restored A STAR IS BORN here in the mid-eighties.

The $300,000 Lock Cities Theatres Circuit house launched July 18, 1925 and was leased by Famous Players-Lasky for booking Paramount films there and Keith vaudeville acts were also there at the outset. Architected by Leon H. Lempert & Son with John Moon & Co. as contractor, the storage area had 42 sets for the live vaudeville shows. At opening, it had a $25,000 Wurlitzer Hope-Jones Organ with Bobby Demming at the keys and Joseph Pomeranz as the conductor.

1,100 of the seats were on the main floor with Wilton carpeting underneath the Haywood-Wafefield seating. 500 seats in the balcony and 125 loge seats made up the 1,725 seat theatre at its launch. A curtain at the 40'x25' proscenium had a mural painted by Lusk Studios of Rochester. George T. Cruzen was the opening manager.

Saw Deepwater Horizon on the big screen at the Palace. Always a treat seeing a movie here.

According to the Facebook page for the Historic Palace Theatre restoration work has uncovered artwork from 1925.