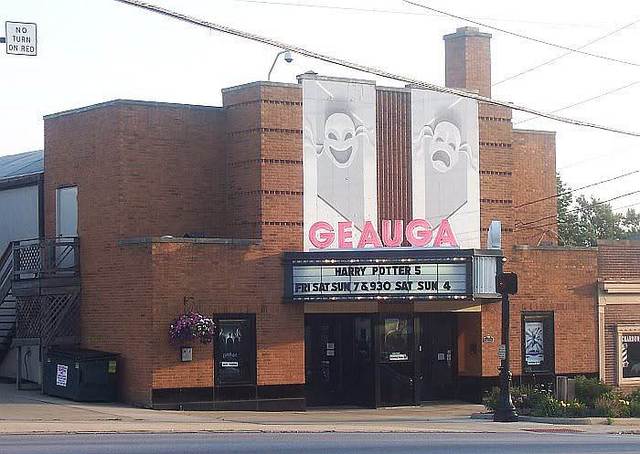 The former Geauga Cinema was built in 1939 and ran successfully for years, until finally closing in 1996.

Two years later, owner Larry Dolan donated the theater to the city, which then leased it to the Geauga Lyric Theater Guild for $1 per year. The Guild has since turned the Geauga Theater into a legitimate theater and has raised attendance from 1,000 to 20,000 patrons per year.

Renovations began in 2001, and with the first two phases of the restoration effort completed, the theater’s lobby and exterior were renovated and restored with a $300,000 grant from the Geauga Department of Community and Economic Development.

Was there a theatre in Chardon called the Chardon. I recently spoke to a lady who once lived in Chardon and she recalled a marquee with “twinkling lights” and the lady who sold her a ticket then sold her a box of popcorn.

And how are the renovations that were to “be completed by the end of 2001” coming along? I hope that the renovation work has been completed. And again, was there a theatre in Chardon called the Chardon?

The Geauga Theatre was the subject of an article in the June 24, 1939, issue of Boxoffice Magazine, a few months after it opened. The house was built for Mr. L.M. Smith, who was also the owner of the old Chardon Theatre. The design, construction, and outfitting of the Geauga Theatre were all handled by the F&Y Building Service of Columbus, Ohio.

The Art Moderne design featured such amenities as chrome and leatherette furniture in the lobby and rest rooms, velour wall panels in lobby and auditorium, and steel-backed theater seats upholstered in mohair and maroon leather. The exits flanking the stage were surmounted by velour panels featuring decorative oil paintings in black, white, and scarlet, lit by up-lights concealed in troughs.

The Theatre Division of the F&Y Building Service apparently designed quite a few theaters in the Ohio Valley. I’ve only been able to find the names of a small handful of them so far, but the company ran an ad featuring the Geauga Theatre in the June 24, 1939, issue of Boxoffice Magazine. One line reads “Go see the Geauga or any of the many other F&Y designed and built theatres.”

The company was operating at least as late as 1959, headed by Leo Yassenoff. He was also interested in the Academy Theatres Circuit, later the Academy-Neff Circuit, run by Frank Yassenoff and then by Milton Yassenoff. It seems likely that theaters built for this circuit during the era would have been designed and built by the family company.

If the Geauga is typical of the quality of F&Y’s design, the company surely qualifies as a significant regional design firm.

Thanks for answering a question that I posted in 2006…had forgotten about it, but have not added the Chardon to CT.

The marquee of this theatre was shown on a crime documentary “Impact of Murder” on the Investigation Discovery channel.

As Joe pointed out many years ago, the theater itself is just the Geauga. I don’t see any movies listed on their calendar.

Boxoffice, June 25, 1962: “Geauga County’s only indoor theatre, the local Geauga, went into new hands recently with a real estate transfer of .17 acres from Mr. and Mrs. Carl Brinkman to the Chardon Theatre Enterprises. The new owners are Lester Miller, president; William Shiffler, vice-president, and Robert Marshall, treasurer … Brinkman, retiring owner and manager, bought the theatre July 1, 1946, after leasing it in 1945 … The (new) owners have had no previous experience with the motion picture industry”