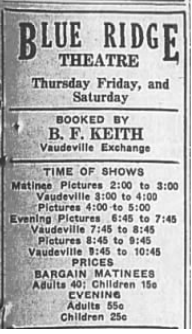 Located on what was originally Main Street. The Hippodrome Theatre was opened as a movie theatre & vaudeville house on September 4, 1911. On April 17, 1922 it was renamed Blue Ridge Theatre it continued with the same program policy. It was still open in 1926, but had closed by 1927 and became a warehouse.

The obituary of a Lawrence R. Fleming, published in the November 1, 1932 issue of Variety includes the lines “[f]ormerly was manager of the Dixie theatre, film house, in Fairmont, and Blue Ridge theatre, vaudeville house there. Both theatres have been made into warehouses.”

Theatre was located on Adams Street and is now demolished. Was originally the Hippodrome.

The Hippodrome launched September 4, 1911 with two Mutual photoplays, a big feature and vaudeville acts. Cady & Hiele programmed the venue which wasn’t quite completed at the first show and could not handle the crowd which fell short of a full house. The venue had an airdome adjacent to it, as well.

Sol Burka took on the venue in 1922 and, after a refresh, he reopened as the Blue Ridge Theatre on April 17, 1922 with Paramount movies. The opening title was Gloria Swanson in “The Great Moment.” Vaudeville was from B.F. Keith when programmed. The theater closed the expiry of 15-year lease.