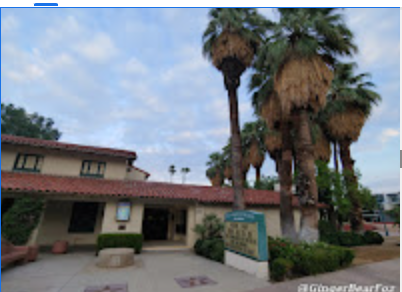 The Frances S. Stevens School was the site of the first commercial movie showings in Palm Springs. The school was built in 1927 by Prescott Stevens who funded it, donated the land and named it after his wife. The plaque on the building notes that its auditorium served as the city’s first theatre. In September 1997 it was opened by the William Layne family as the Palm Canyon Theatre, a non-profit Broadway style playhouse. The 220-seat theatre, owned by the city, is also a venue for the Palm Springs International Film Festival.

Earle Strebe started showing movies at the Stevens School auditorium in 1927. The Riverside Press Enterprise reported Earle, as a bellboy at the Desert Inn, got his experience running the movie projectors two nights a week in the lounge for a dollar a week. As Palm Springs Life notes, the Oasis Hotel soon asked him to run their projectors, furthering his reputation. After the Steven School Theatre became successful the 24-year-old Strebe was forced to give up his job at the Desert Inn. Film Daily Year Book 1931 lists a ‘Community’ theatre with 200 seats.

Mr. Strebe’s next theatre’s were the Palm Springs (Village) Theatre in November 1932, the El Paseo Theatre in 1935 and the Plaza Theatre in 1936. The Desert Sun archives provides a trove of information on Strebe’s years of a councilman and civic leader. His partner and mother-in-law was Zaddie Bunker, known as ‘the flying great-grandmother’, who was featured on the ‘This Is Your Life’ television program in 1959.

Earle passed on in September 1994 and his name is on the Palm Springs Star Walk in front of the Plaza Theatre.