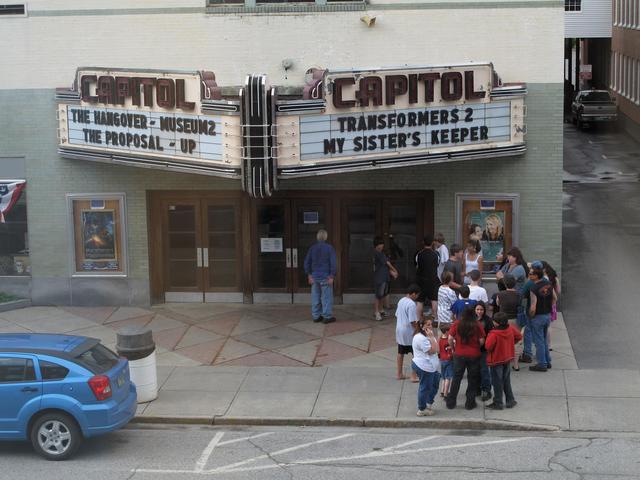 The Playhouse Theatre was originally a single screen theatre in the center of Montpelier which was opened prior to 1926 when it had 600 seats. By 1936 it had been enlarged to seat 1,033.

Around 1940 it was renamed Capitol Theatre and was operated by Paramount Pictures through their subsidiary John Ford. It has been expanded to five screens.

It does have five screens, but it is still known as only the Capitol Theatre. There are three large screens and two small. Website for the theatre is http://fgbtheaters.com/, but it just lists show times, cost and movies for this and the Paramount in Barre. I’ll take a photo for when the ‘Add a Photo’ is back up.

Try this link http://fgbtheaters.com The comma on the end of the above link broke it.

I saw a 1938 photo of a Playhouse Theatre in Montpelier. Was that used for films at all?

I do seem to recall the fifth theater was around that time frame of 1995, but the conversion to a multiplex was much earlier. I belive I was in late elementary school (early 80’s) when it became two screens, and the next two came along before I was in high school (before 1985). Then the fifth screen a few years later. I’d love to see pictures of the old theater before it was converted at all.

The Theatre Historical Society archive has the MGM Theatre report for the Capitol; it’s Card # 583. Address is State St. There is an exterior photo taken May 1941. Condition is Excellent. The report says it was built in 1940 and it shows MGM films. 988 seats. The 1940 population of Montpelier was 8,000.

Too bad when classic old theatres are multi-plexed. Much better to save the original auditorium and just build 4 more new ones. Of course that breaks the budget.