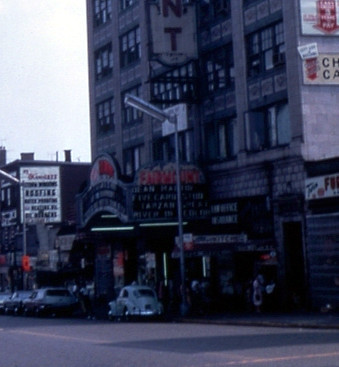 The Fairmount Theatre was one of the largest Loew’s theatres in the Bronx, opening on September 12, 1928, a full year before it was eclipsed by the Paradise Theatre. Designed by architect Joseph Orlando, the Fairmount Theatre was in French Renaissance style. The auditorium was semi-Atmospheric style, with patches of dark blue sky peeking through the latticed ceiling, but without floating clouds or twinkling stars. It was equipped with a Robert-Morton 3 manual 19 ranks organ.

The Fairmount Theatre opened with vaudeville and movies, but after the Paradise Theatre’s debut, it went to straight movies and playing them two weeks after that Grand Concourse showplace. Loew’s dropped the Fairmount Theatre in the late-1950’s, but it struggled on under “indie” ownership until conversion into a Hispanic cultural center and museum.

Then, in a surprising development, realty developer Greg Morris took over the building in 1986, with plans to convert it to a movie fourplex, retaining as much as he could of the original auditorium. In the end it was converted into a triplex operating a Fairmount Cinemas. It was closed in February 1991. A recent photo of the site on the internet shows most of the building being used for a supermarket.

Has all of the internal ornamentation been lost? Are there drop ceilings protecting the original ceiling?

The 1928 Robert-Morton theatre pipe organ was disassembled some time prior to 1985 and is now installed in the studio of Paul van der Molen of Wheaton, Illinois.
The organ was described as having “18 ranks, 6 tuned percussions,” and “a toy counter for special effects.”

There is at least one recording of the organ: a two-cassette collection* of hymns entitled “Glory Sounds” played by organist Tom Hazleton. The set was issued by:

(*spotted at a used-book store outside Cedar Rapids, Iowa)

Looks like the old LOEWS marquee with the Loews ripped off.

I am a fireman who works In This neighborhood, my firehouse is on Tremont avenue in between the lowes fairmont theater and the RKO Chestertheater that was on Boston road, do any of you have any

original pics of any of these theaters in their glory days, my company often performs safey inspections on These buildings and we would love to see some pictures of the inside of these buildings in their hay day.

The theater was located a few blocks from my grandmother’s apartment in the Bronx, and I went once in 1953 to see “King of the Khyber Rifles” with Tyrone Power. I was obsessed with CinemaScope films and this was an early one. I remember very little about the theater, except that it was a rather small one by Loew’s standards.

What’s the interior look like now? Is it being used?

How far was it from Yankee Stadium?

The Fairmount was about 2 to 3 miles northeast of Yankee Stadium. I lived equidistant between them

According to the New York Times, the Fairmount did converted did try to convert into a quad, but the papers said that it converted into a triplex. For a short time, it was known as Fairmount Cinemas, and was operated by Lesser. The theater operated as a first-run/second-run triplexish until February 1991 as latest.