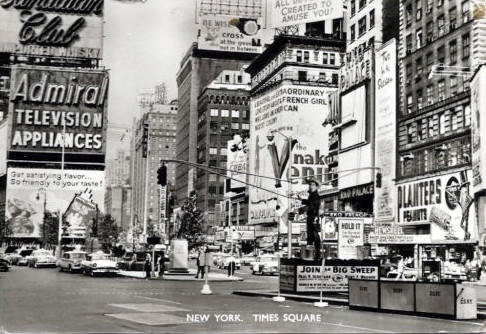 The Palace Theatre of New York City, the one that virtually inspired them all, started out as a vaudeville theatre on March 24, 1913. It continued in that use until November of 1932 when it began showing movies under the direction of RKO. This continued until 1966, when it became a legitimate theatre. For most of the memory of those alive today, it was a non-movie theatre, and is, indeed, perhaps best remembered as the “Valhalla of Vaudeville” as it was dubbed in the day and age when to ‘play the Palace’ referred to the acme of aspirations of vaudevillians and to this day a way of saying that one has ‘made it big!’

When the Palace Theatre debuted its 1,733 seats at 1564 Broadway, it was within a ten story office building that was squeezed between previous buildings on some of the most expensive real estate frontage in the world. Architects Charles Kirchoff and Thomas Rose of Milwaukee were therefore limited to showing their artistry in the three-level auditorium with its sixteen boxes cascading down the walls toward the stage, while being under a graceful arch forming a stylized sunburst above them on either side. In 1920, a grille in this arch was used to front the new organ chambers for the recently installed 2 manual, 4 rank Wurlitzer theatre pipe organ to accompany occasional film novelties that would become not so novel in the next decades. The organ was remarkably small in size for so prestigious a house, but perhaps the management of the time did not foresee the future dominance of film and the need that silent movies had for a good sized organ. Projectors had been installed in March, 1915 under a slight remodling by architect James S. Gavigan. The theatre was wired for sound movies in 1929, a pivotal year in many respects.

Just why an architectural firm in far away Milwaukee was selected for the prime Palace Theatre, is not known, since it would be years to come before this team was well known for the movie palaces with which they would grace that and other cities, 10 in Milwaukee alone. Perhaps it was Martin Beck himself, impresario of the Palace Theatre, who was touring his Orpheum Vaudeville theatres across the land and happened to admire the gracefulness of the 2,500-seat Alhambra Theatre there, and resolved to have its architect design his new showplace in a somewhat similar style.

Here in the Palace Theatre, it was also to be a combination of Neo-Classical and Adam periods. A relatively simple styling that did nothing to suggest the movie palaces to come, it was characterized by moldings of such as fruit festoons and bead-and-reel to outline the panels into which the walls and ceiling were divided. Perhaps there were very elaborate draperies on the proscenium, but the only found photos are from 1951 and reflect replacements to accommodate the large movie screen of the era, so that as of then, only simple panels of velour in 50% fullness constitute the grand drapery and the house curtain, any draperies in the boxes having by then been removed. Both sides of the main floor seating also boasted a cascading line of elevated (parquet style) boxes from the balcony line forward to the annunciator frames of the drop-card style. In 1939 the lobby and marquee had been altered, and were later completely redone again. The entire facade was largely demolished in the 1980’s, but the interior is virtually intact.

Why did this one theatre rise to such prominence? It is a long and complicated story, as one might expect of a theatre created at the joining of eras in exhibition, but perhaps it is as claimed in the noteworthy book: “Show Biz: From Vaude to Video” by Abel Green and Joe Laurie, Jr., that it was the coup in obtaining the appearance of the great French tragedian Mme. Sarah Bernhardt, that capped the very long list of notables of both the Vaudevillian and legitimate stages, as so ably brought out in this book, and in the book: “The Palace” by Marian Spitzer in 1969. This was for years the ‘Flagship’ theatre of the RKO circuit and even once housed the offices of this dominant national theatres/vaudeville circuit.

In recent years, it is often the host to long-running Disney stage epics and other hit musicals, and in that vein may it long continue! The final show to be produced in the theatre in its original location was the musical “SpongBob Square Pants” which closed on September 15, 2018. In a $2.4 billion project the theatre will be raised 29feet and a shopping arcade inserted at street level. The hotel built on top of the theatre will be expanded to 663 rooms, a restaurant and nightclub. A huge wrap-around advertising screen will cover the building.

When you entered the Palace on Broadway you were in a long outer lobby and box office. That will now be retail. The theater will be raised up to the third floor of the new construction so there was no place to have the entrance on Broadway. New construction of an entrance on 47th Street with an 80-foot-long marquee, will lead up to the third floor like the Marquis across the street.

Developers created a plan to raise the protected landmark 300 feet to make room for stores below. Recent New York Times article with color photos can be viewed here

2023 has been mentioned as possible reopening of the Palace, but nothing more specific. Much will depend, of course, on what’s available for the first booking.

I posted this in 2018. Can anyone identify the marquee whose underside is shown in the upper right corner? Can’t recall if I posted it to that theatre’s page or not.

I have added this below `60s image of The Cowsills to the Loew’s State page. However there appears to be a single row of lights instead of three rows as in the above link Al Alvarez posted.