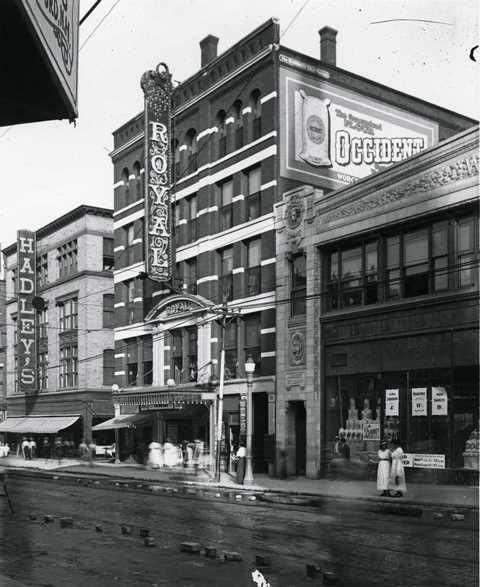 A theatre just off downtown Worcester. The Royal Theatre was open by 1919. It is discussed in the book ‘Worcester’s Union Station’ by Idanay Michaud Arsenault and a photo of the outside of the theatre appears on page 29, taken when the theatre was showing the 1939 film “Main Street Lawyer”.

The MGM Theatre Photograph and Report form for the Royal Th. in Worcester has a facade photo taken in May 1941. There is an elaborate 1920-style entrance in the middle of a commercial block. Beneath the marquee is a centered box-office with double doors on each side. The name “Royal” is on the front of the marquee and there appears to be some sort of emblem directly above the name. The Report states that the Royal is on Main St. in Worcester; that it has been a MGM customer for over 10 years; that it’s over 15 years old; is in Poor condition, and has 780 seats, all on one floor.

I have a vintage postcard (post-marked 1925) showing the Royal Theatre. The Royal was right next to the Worcester Market. The Market building still exists (looks closed but amazing) and can be seen in the Google street view, at the corner of Main Street and Chandler Street. The Royal has a large vertical sign, nearly three storeys in height.

Worcester’s Royal Theatre is mentioned in the June 7, 1919, issue of The Moving Picture World:

“The Royal Theatre, seating 800, admission 10 and 15 cents, is a downtown house, under the management of O. S. Reiseroff. He uses Paramount, Select, Triangle, Vitagraph and Universal. Business is fair here.”