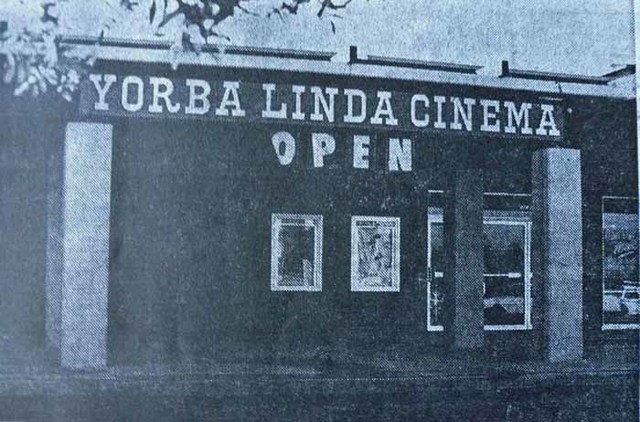 This cinema falls under the category of the Jerry Lewis Cinemas, an idea that never really caught on. According to old newspaper advertisements the cinema opened on December 10, 1971 with “Tora! Tora! Tora!” and an admission price of $1.50. The Anaheim Bulletin on January 12, 1972 announced that on the following Saturday Debbie Reynolds, along with her friend Glenn Ford, who were pictured in a photograph, would be cutting a strip of movie film to dedicate the Yorba Linda Cinema in Fullerton. Debbie had invested in this company with her husband, Harry Karl, in the hopes of providing suitable family fare for the entire family.

This was to be the first of 200 mini-theaters to be built nationwide. The theaters, with up to three screens, were expected to have seating ranging from 160 to 325. The 16mm projectors were to be entirely automated, as were the concessions and support systems, with the manager as the button pusher, eliminating the need for a large staff. The manager was asking the visiting celebrities coming to the opening to place their handprints in concrete slabs to become a permanent part of the cinema.

The theater was open until 1976 before it faded into oblivion, and it has been used for retail shops for many years. Today, no evidence remains at the location of any handprints in concrete.

I remember this little gem because it was HUGE to have a real live movie theater so very close to our home in Placentia. The movies that I recall seeing there were Love Story (in 1972), Billy Jack and if you can believe it, Gone With The Wind. What fun!

When we moved to Yorba Linda in 1974, I swear this place was operating as “The Bogart Theatre.” Can anyone else confirm this? I was only 7 at the time.

Jerry Lewis Mini Cinemas caught on for a time. The company, a partnership between Jerry Lewis and the Network Cinema Corporation,were in business from 1969 to 1980. At the company’s peak (mid 1970’s), there were roughly 200 franchised theatres operating and another 100 pending development. It was more a case of an idea that did catch on but couldn’t be sustained.

In the 1970’s, Debbie Reyonlds was almost the universal “go to” celebrity for grand openings and promotions. You’ll find her name attached to countless theatre openings from the period. At the time, she was attempting to pull herself out of financial distress (husband Harry Karl had gambled away her money)and she was willing to lend her name/presence to nearly any paying gig.