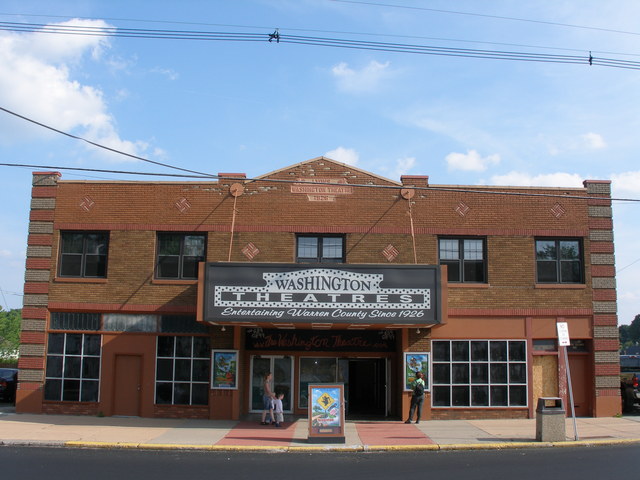 The Washington Theatre was opened in 1926. It was built for both silent movies and vaudeville. The theatre seated 800. It was proclaimed “The Showplace of Northwestern New Jersey”. It was equipped with a Robert morton 3 manual 2 ranks organ. Four years later it was modernized and wired with the addition of sound.

Opened by the Lions Theatre Circuit, the Washington Theatre has had many owners. In the 1970’s the theatre was twinned. At this time much of its ornate style was covered over or destroyed. Over the years the Washington Theatre fell into a state of disrepair, and closed in 1997. It did not die however. It was briefly reopened by a local community group.

I am looking forward to coming down to this GEM of a theatre! This theatre has HEART AND SOUL! Marco Joni are doing a GREAT JOB!

Peter – thanks so much for your support -we really need it! see you soon! joni

In 2009, the Washington Theatre Preservation Society is seeking to purchase the building and register it as a landmark. Owner Marco Matteo believes this step will allow the theater to prosper.

I live in Rockland County NY, just 15 min from the boarder of NJ. The Washington Theatre is run with real PASSION under the guidance of Marco and the crew! It is a 140 mile round trip, but is worth it!

I am looking forward to visiting the theatre this Saturday to see Sherlock Homes and The Book Of Eli!

Will this theater upgrade to digital 3d? Then this theater could show 3-D films again. I used to go by the theater when it was open on the way to work at the workshop Abilities of NWJ which is near Route 31. Has that old time feel. As for its location, it’s right between Mansfield to the right and Pohatcong to the left. It’s a shame that Warren County has three theaters left, which places it in third place behind Sussex’s 2 (Newton and Sparta) and Morris with a lot.

Drove by this theater today. It doesn’t look active. Date on stone entablature is 1926. I’ve never been inside, but it would appear from photos that it’s strictly a movie house, i.e., no real stage, which limits its usefulness for other events and organizations that would require one, such as drama and musicals. Exterior evidence for the lack of a stage is that there’s no stage house; the building has a gable roof for its entire length behind the head house. Economic viability for this theater is going to be a difficult challenge, IMO.

Theatre has been closed now for over six months. There was supposed to be some other group trying to take it over and turning into a performing arts Center that still shows movies as well. Nothing happening now with that plan